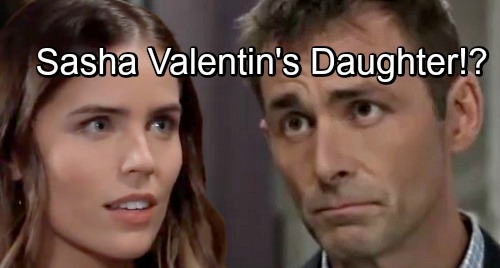 If she’s Valentin’s, who was his baby mama? We know Sasha bears a strong resemblance to Britt Westbourne (Kelly Thibaud) who coincidentally (or not so coincidentally) is also in Port Charles right now.

Other General Hospital spoilers have teased that Sasha could either be a baby a teenage Britt or her mother Liesl Obrecht (Kathleen Gati) gave away through Madeline Reeves (Donna Mills). There is also General Hospital buzz that Liesl herself could be Sasha’s mother and gave her to Madeline.

Valentin can and has gotten pretty low, but he would never stoop to doing the deed with a teenage Britt. Neither would he abandon a child of his if he knew about her… he absolutely adores Charlotte (Scarlett Fernandez). However, one scenario could answer both the question of Valentin possibly being Sasha’s father and her strong resemblance to Britt.

Could an off screen story like the one that led to Olivia Falconeri (Lisa LoCicero) and Julian Jerome (William DeVry) producing Leo Falconeri (Aaron Bradshaw) happened twenty-something years ago between Valentin and Liesl? Valentin may have not had a clue that Liesl became pregnant with his child, and didn’t know anything about her until he went to Madeline trying to get proof Nina’s child lived! Also, her name “Sasha” could be a hidden clue to Valentin’s being her father -as the name “Sasha” is of Russian origin, having been taken from a nickname for the name “Alexandra.”

This could also explain why Valentin at times seems protective over Sasha, although he has tried to get her to leave town and she had chosen to stay. He did the same thing with Peter August (Wes Ramsey) who he has acted as a father toward and protected all his life.

When Sasha came to him telling him about what Ava Jerome (Maura West) did to her though, he gave her more money so she could stay in town, which was a big turnaround from telling her to go back to Chappaqua! It’s doubtful he’s told her about her true parentage though… he wouldn’t want her messed up with Liesl, and it would not be a good time to break it to her that he’s her father either, although with her in town he can keep an eye on her.

So will the whole truth about Sasha come out soon, and will she remain in Port Charles? Will Valentin ever tell her the truth about himself? Stay tuned to GH and keep checking General Hospital spoilers on CDL frequently to see this convoluted family tree be exposed branch by branch.