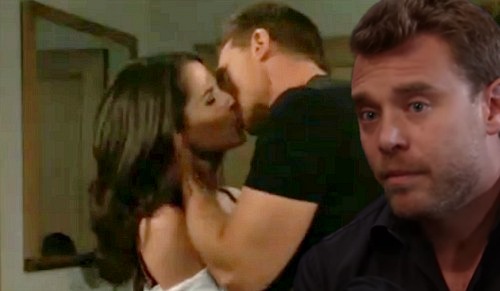 General Hospital (GH) spoilers tease that Drew Cain (Billy Miller) will interrupt a hot moment between Sam McCall (Kelly Monaco) and Jason Morgan (Steve Burton). He won’t mean to spoil his ex and brother’s passionate reunion, but that’s exactly what he’ll do. When Drew stops by Sam’s penthouse for support, he’ll inadvertently derail the sex session they’re about to have.

Drew recently let Sam know he couldn’t keep leaning on her. He didn’t think it was a good idea since it could rev up his feelings and make their split tougher. However, Sam and Drew still share a special connection. Old habits are tough to break, so Drew will end knocking at Sam’s door soon enough.

Drew’s terminally ill son, Oscar Nero (Garren Stitt), is going through a lot right now. That means Drew’s going through a lot as well. He just won’t be able to resist seeking out Sam’s comfort. Thankfully, Jason is now in the loop on Oscar’s condition. He’ll realize Drew’s really struggling, so the interruption will bring awkwardness and not anger.

Sam and Jason’s steamy encounter will temporarily fizzle when Drew shows up, but maybe the twins can play nice. Jason’s been bonding with Oscar a bit lately. As his uncle and someone with a compassionate heart, Jason doesn’t want to see such a dark outcome for the teen. He should understand why Drew would be drawn to Sam at a time like this.

Nevertheless, GH spoilers say Drew won’t stick around for long. He’ll sense that he just killed the mood, so he’ll choose to bail as soon as possible. Drew may decide to find another source of comfort or just deal with his issues alone. Once Drew heads for the exit, that’ll leave Sam and Jason to face the tricky aftermath. Unfortunately, they’ll be unable to recapture the sizzle they had before Drew’s arrival.

“Jasam” fans won’t be witnessing any “love in the afternoon” between Jason and Sam just yet. Some may even be upset that Drew was written into the scene! Still, General Hospital writers are finally laying the groundwork for a reignited romance. It appears Sam and Jason are slowly inching their way back to each other.

Of course, Drew will continue to be a slight obstacle. After Sam sees the heartbreak in his eyes, she’ll wrestle with moving on. Sam truly seems to want Jason, but taking the leap toward a committed relationship will be difficult.