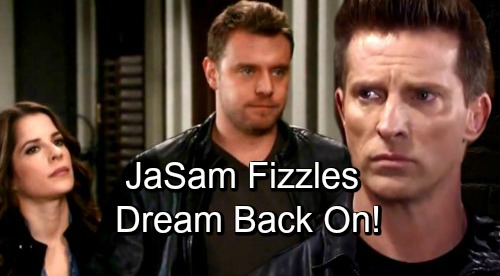 General Hospital (GH) spoilers reveal that Jason (Steve Burton) and Sam (Kelly Monaco) are finally making progress. November sweeps info had been teasing that they’d take a step forward, but not the one “JaSam” fans have been waiting on. Wednesday’s episode made sense of that. Jason ended up snuggling with sick Sam, who asked him to stay with her and admitted she missed him.

In other words, Jason and Sam went to bed together – just not in the way many viewers were hoping for! Still, it certainly was a sweet scene. Jason’s being kind, patient and attentive. It’s clear that Sam’s everything he’s looking for in a woman. Jason loves Sam with all his heart and will gladly go all in on this relationship whenever she’s ready.

Sam seems to be inching in the right direction, but what’s it going to take to break the barrier? Is she actually just stringing Jason along? This isn’t just about sex either. Sam’s keeping a guard up that has to come down. A moment of sentimental weakness on meds doesn’t really count.

Sam needs to choose Jason and their future together, but she hasn’t been willing to do that so far. What’s holding her back? Whether something’s up behind the scenes or GH is just dragging this out for drama’s sake, this storyline has been beyond slow. Some General Hospital watchers have grown tired of waiting.

Of course, Jason isn’t the only guy Sam’s close to. Thanks to Oscar’s (Garren Stitt) tumor and everything Drew’s (Billy Miller) going through, Sam has remained close to her ex, too. Drew tried to push Sam away for a while, but he eventually surrendered. There’s just no one who can calm him down quite like Sam can. They still share a special bond that could come into play again down the road.

If General Hospital isn’t willing to go full-speed ahead with “JaSam,” should they just change course and go for a “Dream” reunion? Plenty of “Killy” lovers would cheer for that. Sam works well with both Jason and Drew, but it’s just a matter of what GH will commit to.

What love interest do you want to see Sam with? Does she belong with Jason or Drew? Would you rather see Sam with someone else instead? General Hospital spoilers say some twists and turns are brewing, so we’ll give you updates as other GH news comes in. Stick with the ABC soap and don’t forget to check CDL often for the latest General Hospital spoilers, updates and news.