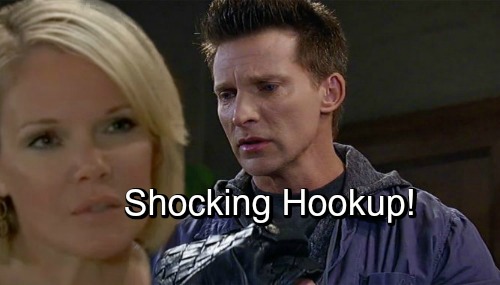 General Hospital (GH) spoilers reveal that Ava’s (Maura West) headed down a dangerous road. She’s inadvertently gotten tangled up in Ryan’s (Jon Lindstrom) web of deception. That can only lead to bad news as the end draws near for Kiki (Hayley Erin).

There’s no confirmation on Kiki’s looming demise yet, but the writing’s on the wall. Since we’ve got evil Ryan out for blood and Erin’s leaving the show, Kiki’s murder makes sense. Now that Ava’s in Ryan’s orbit, it seems even more likely.

According to a recent Soap Opera Digest blind item, one daytime drama’s planning to kill off a well-liked character. When you add up all the evidence, it appears to equal a gruesome end for Kiki. If so, the fallout’s going to be brutal for Kiki’s friends and family members. Naturally, Ava will be the one most affected by this loss.

General Hospital fans know Ava’s been furious with Kiki lately. She’s completely turned against her daughter, so that’ll make it worse if Kiki bites the dust. If Ava plays a role in Kiki’s death via Ryan, that’ll really rev up her guilt. Ava may feel like she’s spiraling out of control by the end of all this.

Meanwhile, we’ve got a thirsty Jason (Steve Burton). Sam (Kelly Monaco) got him all hot and bothered, but an interruption shut things down. Later, Sam admitted that she just wasn’t ready to take that step. They’ve made love plenty of times in the past, but a sexual reunion is on hold for now.

Jason suggested that he’s getting used to cold showers, so he’s clearly in need of a steamy night. He assured Sam that he could be patient, but can he really? Temptation could be lurking for sex-craving Jason.

Let’s say Margaux’s (Elizabeth Hendrickson) current plan pays off and Sonny (Maurice Benard) lands behind bars. You can bet Jason would feel guilty for not being able to protect him. Sonny would inevitably get off the hook later, but Jason would only see a bleak outcome in that moment.

That could put Jason in a dark and vulnerable place. We also know that he has a bit of a history with Ava. It’s not a romantic one, but they formed a connection at that Russian clinic. Carly (Laura Wright) wanted to downplay the role Ava played in helping Jason, but the point is she did help him. If it weren’t for Ava, Jason probably never would’ve made it home.

Of course, the Morgan (Bryan Craig) pill swap revelation blew up their new friendship. There’s been tension ever since, but could grief and pain change the game? It’d be deliciously soapy for Ava and Jason to wind up in bed together.

In an interview with SOD, one of GH’s co-head writers weighed in on what’s next for “JaSam.” Shelly Altman made it clear that brakes would be pumped and hurdles would be hit. She acknowledged that Jason and Sam just hit a wall, so there’ll be some complications along the way.

“And the fact that they could not step beyond that wall in this moment could mean…that because of the unfortunate timing, something else may prevent them from taking that step,” Altman said. Could Ava be the next “JaSam” hindrance? Sam would be hurt if Jason breaks his promise to wait and hits the sheets with Ava!