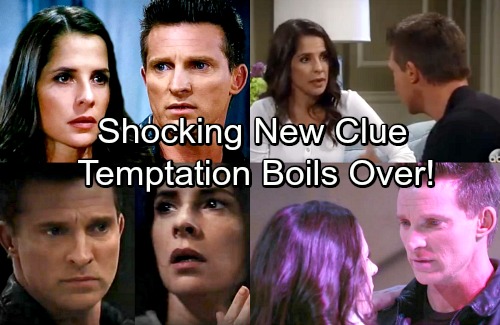 General Hospital (GH) spoilers tease that Jason (Steve Burton) will move forward with his mission. He’s determined to find out Heinrik’s alias and whereabouts, but that task is proving quite difficult. Since Anna (Finola Hughes) wants to protect Heinrik, she’s not keen on truly helping Jason.

Spinelli (Bradford Anderson) was a little less than helpful as well, so Jason could use someone else with skills in his corner. Fortunately, Sam (Kelly Monaco) will be happy to pitch in. GH fans know her initial reaction was to step up, but Alexis (Nancy Lee Grahn) tried to plant some doubts. However, Sam thinks she can keep her love life out of this case. She’ll press on and try to help Jason solve this mystery.

General Hospital spoilers say Sam and Jason will soon find an intriguing clue. They’ll head to the bank in Switzerland and stumble across something surprising. Since we’re talking clues here, it seems Jason and Sam won’t find exactly what they’re looking for. They were hoping the money trail would lead them to Drew’s (Billy Miller) memories and Heinrik’s info.

On the bright side, this clue could put them one step closer to their goal. Did Faison (Anders Hove) pull a fast one? Did he leave a strange hint instead of what his will promised? Those are some interesting possibilities.

Of course, it’s also possible that Peter (Wes Ramsey) planted this clue for his mother. Thanks to the epigraph in The Severed Branch, Jason suspects that Heinrik wants to draw his mom out of hiding. Jason and Sam may believe this hint ties in with Heinrik’s grand plan.

If so, Jason should pass along the news to Anna and see what she thinks about it. General Hospital spoilers suggest that Anna will be rattled, but she’ll keep her quest in motion anyway. Anna won’t give up on Heinrik, even if he’s already given up on her.

As for Sam, she may not be able to resist temptation. Sam thought she could put her feelings for Jason aside and view this as work. Nevertheless, teaming up with Jason will bring back memories and strengthen their bond. Sam claims she isn’t ready to reunite with Jason, but her heart and mind aren’t on the same page! She may have to accept her fate soon enough.

It sounds like General Hospital has a big adventure ahead. We’ll give you updates as other GH details emerge. Stay tuned to the ABC soap and don’t forget to check CDL often for the latest General Hospital spoilers, updates and news.