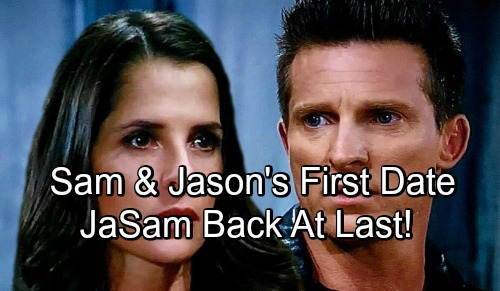 General Hospital (GH) spoilers tease that Jason (Steve Burton) and Sam (Kelly Monaco) could take a big step forward soon. GH fans know Sam’s been hesitant to rush into a reunion with her former flame. She isn’t even officially divorced from Drew (Billy Miller) yet and she’s just had a lot to process.

Furthermore, Sam’s been wrapped up in investigating and ultimately exposing Peter (Wes Ramsey). She’ll also work on stopping Drew’s memory procedure in the coming episodes. That plan may not pan out, but it’ll keep Sam busy a little longer. It seems like there’s been obstacle after obstacle standing in the way of a “JaSam” reunion.

However, Sam will run out of missions eventually. At some point, Sam will have to stop fleeing from her feelings and just tackle them head-on. On June 12, General Hospital spoilers say Sam and Jason will meet up. They’ll sit down for a cup of coffee and take a moment to truly talk.

That tidbit might seem insignificant if we were discussing another GH duo, but this is Jason and Sam. These two have been fighting back sizzling chemistry for months. They’ve bumped into each other around town and even in Switzerland, but this time their meeting will be intentional. You could easily argue that this is their first real date since Jason’s return home!

Will this be the beginning of something beautiful for Sam and Jason? Drew could easily forget his feelings for Sam thanks to his looming memory procedure. Kim (Tamara Braun) and Margaux (Elizabeth Hendrickson) could be vying for his attention in the near future, too. It looks like Sam will be drifting out of Drew’s orbit and that could finally give Jason his shot at locking this in.

Many General Hospital viewers are rooting for Jason and Sam. There are certainly plenty of “Dream” supporters as well, but it may be “JaSam’s” time to shine. Will this coffee date lead to romantic dinners, scorching sex sessions and more? We’ll give updates as other GH news comes in. Stay tuned to the ABC soap and don’t forget to check CDL often for the latest General Hospital spoilers, updates and news.