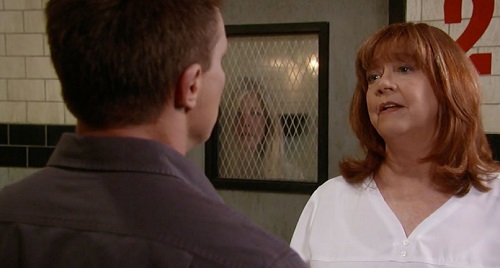 General Hospital (GH) spoilers tease that major drama’s looming at Ferncliff. Kevin (Jon Lindstrom) tried to shut down the janitor scheme, but Jason (Steve Burton) didn’t care about the doc’s disapproval. Only Carly’s (Laura Wright) opinion matters to Jason and she thinks it’s worth the risk.

However, Kevin will remain concerned about the high stakes. Carly’s already facing a rough time in there thanks to Mary Pat (Patricia Bethune). Her Ferncliff troubles could get much worse if Jason gets caught. Kevin will do his best to help Jason avoid exposure, but that plan just won’t work out.

Mary Pat is obsessed with making Carly miserable, so she’ll be watching her closely. It won’t take long for Jason and Carly’s connection to be revealed. General Hospital spoilers hint that Jason will get busted next week, so he’ll immediately be tossed out of Ferncliff. Unfortunately, the backlash should be pretty horrible.

General Hospital fans will recall that Jason and Kevin lied to Mary Pat. When she questioned their link, they indicated that they’d simply seen each other around GH. There’s obviously much more to the story! Once Mary Pat learns the truth, you can bet she’ll report Kevin and try to get him kicked off the premises. Carly could lose both of her allies!

Watching Jason dragged away will be bad enough, but Carly could really be in a dark place over Kevin’s firing. He’s the only legit staff member who cares about her. Once Kevin’s gone, Mary Pat may get some cruel doc assigned to the case. He or she will surely pump Carly full of meds again.

Of course, Mary Pat could take things a step further. Carly hates being all doped up, so she may resist popping so many pills. Will Mary Pat recommend electroshock therapy or some other harsh treatment? Regardless, Carly probably isn’t leaving the supermax wing anytime soon.

General Hospital spoilers say Carly will face some heartbreaking struggles, but at least the walls are closing in on Nelle (Chloe Lanier). Let’s hope someone can expose Nelle’s lies and ease Carly’s suffering ASAP. We’ll give you updates as other GH news comes in. Stay tuned to the ABC soap and don’t forget to check CDL often for the latest General Hospital spoilers, updates and news.