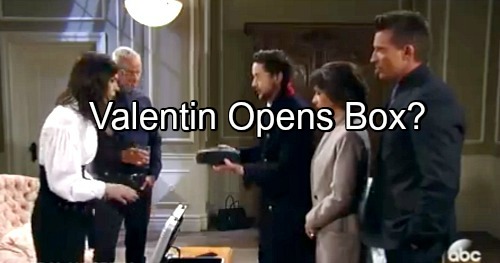 General Hospital (GH) spoilers tease that Valentin (James Patrick Stuart) will have a visitor and it’ll most likely be a very determined Jason (Steve Burton)! The conundrum box Jason, Sam (Kelly Monaco) and Spinelli (Bradford Anderson) found has the Cassadine family crest on it. Spin insists that it’s designed to be opened by one specific person, so Valentin could be a good fit here.

Jason doesn’t know that Valentin’s in deep with Heinrik aka Peter August (Wes Ramsey). He just knows there’s a clear Cassadine-Faison link. Jason will definitely want to find out if the connection has been passed down to a younger generation. 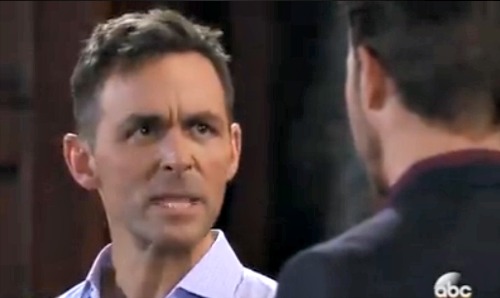 Although Sam and Alexis (Nancy Lee Grahn) have Cassadine ties, it’s obvious Sam had no clue about the box. She simply recognized the family crest. Alexis shouldn’t know anything about it either, so Jason will have to dig deeper. It’s important to get inside this box and find out what it contains.

Conundrum boxes are well-known among soapy spies, so Robert (Tristan Rogers) knew what it was right away. Valentin was a spy before going into the mercenary business, so he should also recognize a conundrum box when he sees it. Will Valentin know the code to get inside and if he does, will he be willing to say so? 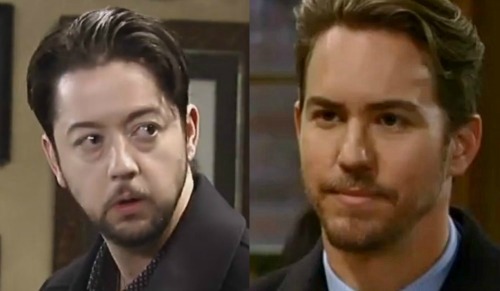 Spinelli’s a master code breaker, but it seems this is one project he can’t tackle. The box could explode and leave little Georgie (Lily Fisher) fatherless, so it’s best to avoid all the peril. Some powerful GH secrets must be held in this mysterious container!

When Jason approaches with the conundrum box, Valentin will naturally play dumb. He’ll most likely assure Jason that he’s never seen this one before and has no idea what’s up. However, Jason may not be so sure he buys that. He might even find some info that specifically links Valentin to his latest discovery. The Cassadine crest is a nice start, but maybe Jason can come up with something more. 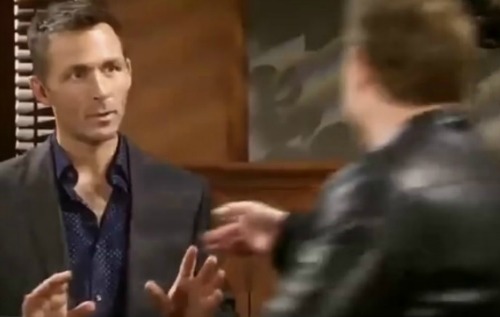 If Jason learns Valentin’s the person this box was designed for, he may force him to open it. General Hospital spoilers say Jason will remain desperate for Heinrik answers. He may feel like this is a good tactic to get them. Jason certainly won’t let Valentin stand in his way!

Just how far will Jason go to get what he wants? Will Valentin face serious threats? Will Jason resort to violence and spark a real war? We’ll give you updates as other General Hospital news comes in. Stay tuned to ABC’s GH and don’t forget to check CDL often for the latest General Hospital spoilers, updates and news.