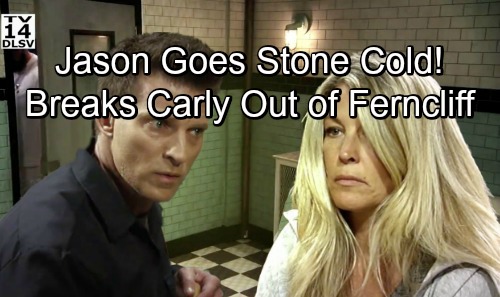 General Hospital (GH) spoilers tease that Jason (Steve Burton) will grow impatient. When it comes to Carly (Laura Wright), he’s definitely been battling some frustration lately. Jason never wanted Carly to use an insanity defense, but she really had no choice. Carly could’ve been locked up in Pentonville for decades and that would’ve been worse than her current predicament.

Jason can’t just pop in and check on Carly like he did before. Their line of communication has been cut off, so that’ll be tough to deal with. Sonny (Maurice Benard) can provide updates, but it’s not the same. Jason has a strong connection with Carly, so he’ll want to see for himself that she’s OK.

Since Jason can’t actually visit Carly, the phone he gave her is the next best thing. Jason wanted Carly to have in case of an emergency, so you can bet there’ll be one soon. General Hospital spoilers say Carly may run into some trouble on next week’s new GH episodes, July 9-13. She’ll have a bit of a meltdown and demand to speak with Kevin (Jon Lindstrom) immediately.

Will Mary Pat (Patricia Bethune) do something to provoke Carly’s wrath? If she tries to shut down all these visits with Sonny (Maurice Benard), that would certainly rile Carly. Mary Pat would undoubtedly like to cut Carly off from her family and any remaining hints of the outside world. She seems determined to make Carly miserable in there.

Since Kevin is likely his evil twin brother, Ryan (Jon Lindstrom), he may not offer any real help. He’s keeping some secrets, so cutting Carly off might work in his favor. Carly may use the remaining battery on her phone to call Jason and beg for assistance. If he doesn’t act fast, Carly could actually go nuts in that place!

During the week of July 16-20, General Hospital spoilers say Jason will make a big decision. He’ll determine that he can’t wait around any longer. Does that mean Jason will try to break Carly out? Will he come up with an escape plot and hide Carly until Nelle’s takedown is done?

It’d be interesting if Carly stumbled across the mystery patient just before fleeing. If it’s indeed Kevin, Jason may realize another GH rescue mission is necessary. He might get Carly to a safehouse and plot Kevin’s Ferncliff getaway next.