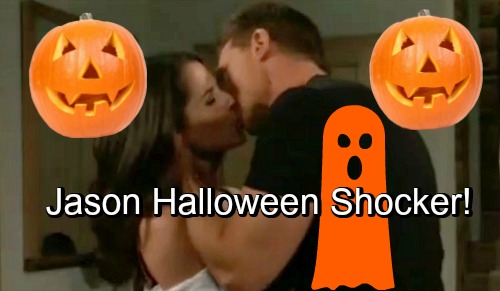 General Hospital (GH) spoilers tease that Jason (Steve Burton) has a wonderful surprise headed his way. He’s been caught up in Sonny’s (Maurice Benard) drama, but he recently made time for some steamy moments with Sam (Kelly Monaco). They made progress by establishing that they want each other, but Sam needed to pump the brakes. She just wasn’t ready for a reunion in the bedroom.

As usual, Jason was kind and patient. He’s crazy about Sam and certainly wants to heat things up, but he’s willing to wait. Between handling Margaux (Elizabeth Hendrickson) and all the Vincent Marino chaos, Jason has plenty to do. Sonny will face more obstacles soon, so Jason will step up to tackle them. He’s always a busy guy thanks to the Corinthos clan and their constant needs.

Staying busy is probably a good thing for Jason right now. It’ll keep his mind off his burning desires and help him avoid at least a few of those cold showers! However, “JaSam” fans were pleased by the honesty they saw from Jason and Sam. It felt like they weren’t dancing around their issues anymore, so that’s a good sign.

Of course, Drew (Billy Miller) could become a problem again. He’s been leaning on Sam due to Oscar’s (Garren Stitt) ordeal, so GH is keeping their connection alive. Sam and Drew have an unbreakable bond as well, which means Jason still has competition. He’s not the only man in Sam’s orbit and that could be concerning for “JaSam” lovers out there.

Nevertheless, new General Hospital spoilers could provide some hope. October 31 will be a good day for Jason. He’ll receive a pleasant shocker, so maybe it’ll involve a Halloween visit from Danny (T.K. Weaver). Naturally, Danny’s mom would accompany him. That could set up a not-so-spooky evening for Jason and Sam. Perhaps GH will let them take another step in the right direction.

The only “JaSam” Halloween scare may be pushing past their biggest hurdle. Can Sam move beyond her fears and hit the sheets with Jason? There’ll be a Halloween party going on in town for the kids, so that could give Sam and Jason some alone time.