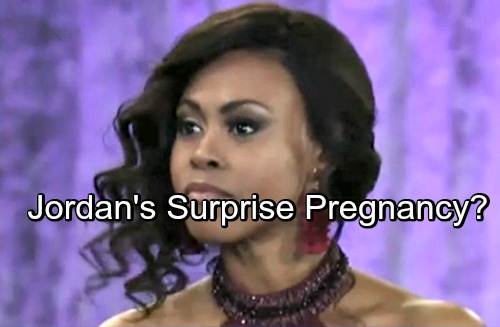 General Hospital (GH) spoilers tease that Jordan Ashford’s (Vinessa Antoine) life will change radically soon. For starters, there’s her impending marriage to Curtis Ashford (Donnell Turner). Those developments will mark major steps forward in Jordan’s relationship. However, GH could have much bigger shifts in store for Jordan. She could get hit with a surprise that really shakes things up.

What will General Hospital writers throw at Jordan next? Could an unplanned pregnancy be looming? Jordan just came through a cancer scare that made her appreciate her life and loved ones. She adores her son, TJ (Tequan Richmond), but there’s surely room in her heart for another child. Starting over with a baby would be a huge deal for Jordan, but it’d be a great storyline.

Curtis and Jordan have finally dropped all the on-again, off-again drama. They’re settled and solid now. Auntie Stella (Vernee Watson) will probably continue to complain, but this potential baby could fix that. Since Curtis will be the daddy, it might bring some peace to this extended family. Stella would undoubtedly dote on this little one.

After all, TJ is not Stella’s actual flesh and blood. She loves him just the same, but giving Stella a blood-relative baby might ease the tension with Jordan. Perhaps Stella would feel like this child connects them all as a family. Curtis and Jordan’s kid could help Stella put past issues to rest.

If she’s cradling a precious bundle of joy in her arms, Stella’s animosity should melt away. She’d be crazy about that child and maybe even care about Jordan as a result. Babies often lead to bonding on soaps.

Port Charles has been packed with pregnancies lately. Maxie (Kirsten Storms) is in labor and Nelle (Chloe Lanier) could be starting hers soon. Brad (Parry Shen) and Lucas (Ryan Carnes) are also getting ready to adopt a son or daughter. They’re relying on an anonymous birth mom to make their dreams come true.

GH might as well keep this baby boom going. As the old saying goes, there must be something in the water! Will Jordan drink the magic pregnancy potion? General Hospital spoilers say some exciting twists are coming up, so anything can happen. We’ll give you updates as other news emerges. Stick with the ABC soap and don’t forget to check CDL often for the latest General Hospital spoilers, updates and news.