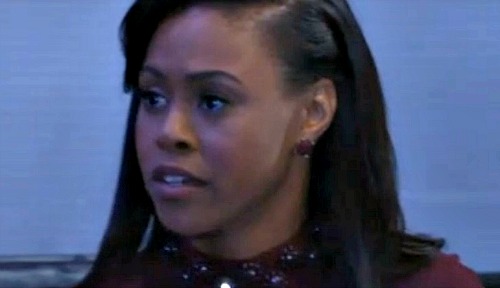 General Hospital (GH) spoilers tease that Jordan (Vinessa Antoine) has some shocking news headed her way. As predicted by CDL, a health crisis is looming. You may have noticed Jordan has a bit of a cough. GH has been subtle about including it, but it’s definitely been an issue in multiple scenes.

The first time or two, some fans might’ve brushed it off as Antoine’s real-life cold. Soaps are notorious for skipping reshoots whenever possible. They like to save time and money, so it would’ve been reasonable to leave a little cough or throat-clearing in.

However, Jordan’s cough became more noticeable later. It was louder and seemed more deliberate. At that point, viewers’ suspicions started to rev up. Now we have confirmation that Jordan will indeed face some scary issues. General Hospital spoilers say Jordan will have a cancer scare, so this is obviously alarming news!

Perhaps Jordan will finally decide to get that chronic cough checked out. It has to be annoying for her at this point. Jordan may expect to speak with a doctor and get a prescription. Maybe Curtis (Donnell Turner) or TJ (Tequan Richmond) will even push her to make an appointment.

Of course, there’s also a chance that Jordan’s already been to see a doc. She could be hiding something. If not, she could be soon. Jordan may begin to hack up blood or develop other serious symptoms. It looks like lung cancer may be the concern here.

Still, GH watchers shouldn’t get too worried just yet. Since GH is calling this a cancer “scare,” that could mean it’ll turn out to be a false alarm. Nobody should panic until this storyline is further along, but it’s terrible to think of Jordan going through something like this.

Thankfully, Jordan will have a few people in her corner. TJ and Curtis will undoubtedly support her, but this is a good chance for Stella (Vernee Watson) to show some compassion as well. GH fans will be anxious to see how it all plays out.

Are you concerned about Jordan’s condition? Do you think she’ll actually have cancer or will it be something less dire? We’ll give you updates as other GH news comes in. Stay tuned to the ABC soap and don’t forget to check CDL often for the latest General Hospital spoilers, updates and news.