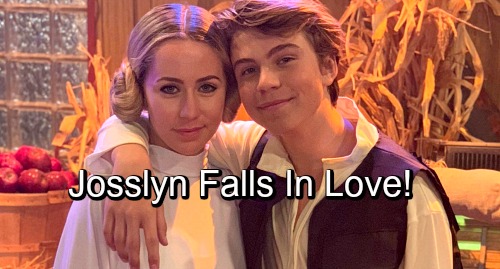 General Hospital (GH) spoilers tease that Josslyn (Eden McCoy) is in for a big shock. She’s been hanging out a lot with Cameron (William Lipton) lately, in the hopes of making Oscar (Garren Stitt) jealous. The two have been going to school events together, studying, and generally doing all the things that significant others do.

Josslyn believes that the closer she and Cameron seem, the greater the chances that Oscar will get jealous and come back to her. She’s singly focused on her goal, but she’s completely oblivious to the effect that her scheme is having on Cameron.

Cameron is clearly into Josslyn and is enjoying all the time he’s spending with her. And the more time they spend together, the harder he falls for her. But how long until Josslyn starts falling for Cameron? The two teens get along well, and Josslyn clearly enjoys Cameron’s company, so it probably won’t be long before she starts to feel something, too.

But timing is everything. As Josslyn and Cameron grow closer, Oscar will be gearing up for his lawsuit against his parents. Oscar’s been successful in keeping his illness from Josslyn thus far, but once his trial revs up, it will be harder to keep the secret. Eventually, Josslyn is going to find out about the reason for his lawsuit, and she’s going to be devastated.

Do you think Josslyn will go back to Oscar after she learns the truth? Stay tuned to the ABC soap and don’t forget to check CDL often for the latest General Hospital spoilers, updates, and news.