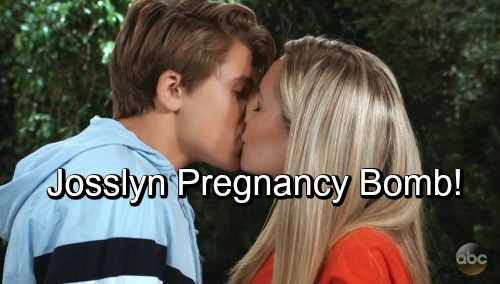 General Hospital (GH) spoilers tease that Cameron’s (William Lipton) feelings will grow stronger. He’s clearly smitten with Josslyn (Eden McCoy), so he’ll be frustrated when she refuses to move on. Cameron doesn’t like Oscar’s (Garren Stitt) plan to hurt Joss, but he also expects him to die. Part of Cam may think Oscar’s right. If Josslyn ends up hating Oscar, it might be easier to say goodbye.

Naturally, there’s a flaw in Oscar’s logic. He might manage to cut off her love for now, but Josslyn would get the full picture after his death. She’d still be just as devastated once she learned the whole story. Perhaps Oscar will realize that eventually. He might decide he needs to line up a replacement and give Josslyn a proper way to cope.

As luck would have it, Cameron’s already waiting in the wings. Oscar might suggest that Cam should use this opportunity to woo Joss. It’d crush Oscar to watch them get together, but that’s a sacrifice he’d be willing to make.

Oscar’s spinning out right now, so he’s not thinking straight. Instead of enjoying whatever time he has left with Josslyn, he’s making decisions he’ll regret. With or without Oscar’s blessing, General Hospital spoilers say Cameron will likely make his move soon.

On October 18, GH spoilers say Cameron will be unable to stop himself. If Josslyn’s receptive to a kiss, Cam may go for it. She pushed him away last time, but she might savor this one. Joss is feeling broken and vulnerable at the moment, so it might even escalate into more.

After all, Josslyn’s been eager to take things to the next level with Oscar. He shut her down and caused some issues a while back. Cameron, on the other hand, would probably love to hit the sheets with Joss. Will they hook up in the near future? That could add to Oscar’s pain now and complicate the situation later.

General Hospital spoilers hint that Oscar may not face a grim fate. Despite how bleak this story looks, hope may be looming. That clinical trial was introduced for a reason. Oscar will fight for his right to deny the treatment, but he may ultimately go through with it. If it saves his life, what’ll happen with Josslyn? She could be torn after leaning on Cameron throughout this mess. They’ll inevitably get closer.

Josslyn could even get pregnant if she gets caught up in the passion and forgets to use protection. She certainly can’t count on Cam to be the responsible one! It’d be pretty soapy if Oscar miraculously recovers and has to deal with Josslyn carrying Cameron’s baby.

Regardless, there’ll be some General Hospital shockers as this plot moves forward. We’ll give you updates as other GH news comes in. Stay tuned to the ABC soap and don’t forget to check CDL often for the latest General Hospital spoilers, updates and news.