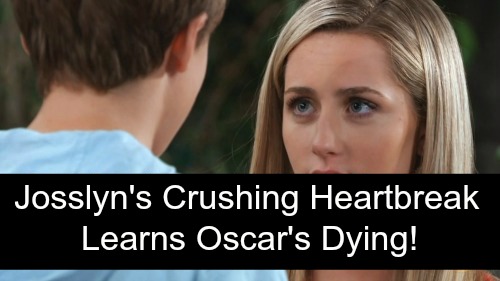 General Hospital (GH) spoilers tease that Oscar (Garren Stitt) and Josslyn (Eden McCoy) will grow even closer. Despite Cameron’s (William Lipton) feelings for her, Joss will remain devoted to her beau. Oscar was furious when he found out about the kiss Cam and Josslyn shared, but Cameron insisted he was to blame for that. He also managed to patch things up with Oscar in the end.

Cameron suggested Josslyn only had eyes for her current guy, so Oscar probably won’t be too hard on her. It’s not Josslyn’s fault that Cameron planted a smooch. She wants nothing more than to be with Oscar and learn more about him every day. General Hospital spoilers say they’ll follow through on some big plans. The teens recently decided to check some items off their bucket list together.

Of course, Oscar has no idea how important that is right now. That’s why Drew’s (Billy Miller) so torn about keeping his looming death a secret. He figures Oscar would live the rest of his days differently if he had the chance.

Fortunately, it sounds like Oscar will manage to live life to the fullest anyway. Even though he won’t be in the loop on his tumor, he’ll focus on making memories with Joss. Let’s hope they make some good ones in case this is their last shot at it. Whether Oscar actually bites the dust or not, GH fans should brace for some heartbreaking scenes.

Sooner or later, Oscar will have to find out the truth. GH buzz hints that a tough setback could convince his parents to come clean. Oscar may hide his diagnosis from Josslyn initially. He might even push Joss in Cam’s direction to give her comfort once he’s gone. If Oscar ends up surviving after all, that could lead to quite a love triangle!

Nevertheless, General Hospital won’t skip Josslyn’s emotional reaction to Oscar’s news. She’ll be crushed when she inevitably finds out he’s dying. Joss is sure to have a major meltdown and seek some support. Carly (Laura Wright) and Cameron seem like great options to lean on. Michael’s (Chad Duell) still grieving for a secretly alive Jonah, so he could connect with Joss over this, too.