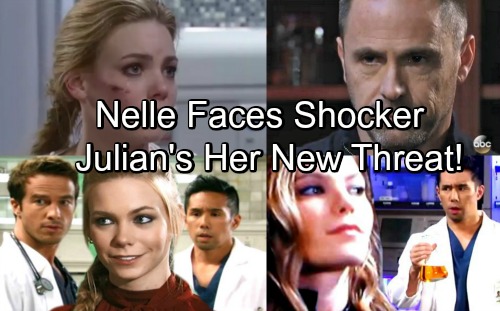 General Hospital (GH) spoilers tease that the ABC soap’s baby drama could be headed in a surprising direction. Maxie’s (Kristen Storms) baby arrived early, but he’s doing well in the NICU. He’s naturally a bit underweight, but Kim (Tamara Braun) has assured Maxie that he’s healthy. Now Maxie just has to deal with all the Peter (Wes Ramsey) mayhem. She may be wrapped up with that for quite a while.

Since GH is holding off on the birth of Nelle’s (Chloe Lanier) little one, perhaps her storyline won’t tie in with Maxie’s. It’d be nice if the show could cut Maxie a break just this once! Poor Maxie already lost Nathan (Ryan Paevey), so it’d be a shame if she had to endure baby chaos, too.

The delay on Nelle’s kid seems like good news – at least for Maxie. Brad (Parry Shen) and Lucas (Ryan Carnes), on the other hand, could face major trouble. There’s no way three babies will be born without something nefarious going down. If Maxie’s son is out of the woods, that leaves two tots for a different plot.

General Hospital spoilers say a surprising foe will get in Nelle’s way. She’ll have to deal with a threat she didn’t expect and work to salvage a plan. Meanwhile, Lucas and Brad will worry about the adoption. Everything’s all squared away, but the anonymous birth mom could change her mind at any moment. That’s something that will definitely weigh heavily on these hopeful dads.

Some GH fans suspect Nelle is actually the anonymous mother. Based on Nelle’s track record, it’s entirely possible she’s cooked up a scheme like that. Nelle might’ve counted on winning Michael (Chad Duell) over before the birth and she’s close to making that happen. She may have also planned to hand the kid off to Brad and Lucas.

Nelle might’ve hoped to score some cash, ditch motherhood responsibilities and get Michael’s sympathy. She could simply claim the baby was kidnapped. Nelle could even blame it on Sonny’s (Maurice Benard) enemies and really turn Michael against his family.

However, Nelle may change her mind about all this as her due date draws near. She might decide she still needs this kid in case her Carly (Laura Wright) plot’s exposed. If Nelle can’t keep Michael in her life as a boyfriend, she’ll at least want him as a rich “baby daddy.” She has to have this child as an insurance policy.

If Nelle is indeed the anonymous birth mom and she backs out of the deal, that could put Julian (William deVry) in her orbit. Perhaps he’ll do some digging and identify her. Could Julian play a role in blowing this for Nelle? It’s possible he’ll blackmail her into carrying out her original plan. We could buy that since Julian will be so determined to make Lucas happy.

Then again, Julian could squeal on Nelle and make Michael wonder what else she’s been hiding. If Michael realizes Nelle was going to give their kid away, he’ll doubt everything out of her mouth. Michael would no longer believe Nelle’s claims about Carly and he’d certainly ditch her for good.