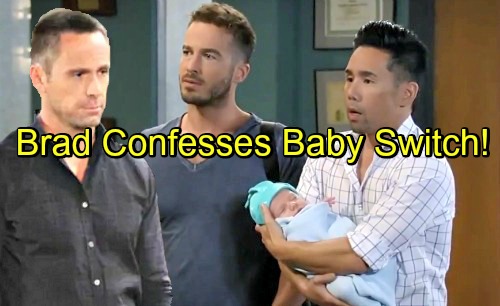 General Hospital (GH) spoilers tease that Brad (Parry Shen) will get some distressing news. Alexis (Nancy Lee Grahn) will inform him that the birth mom wants her baby back, so he’ll mull over his next move. Brad obviously doesn’t want his family ripped apart, but he also has a major secret to worry about. “Wiley” is actually Jonah, Michael (Chad Duell) and Nelle’s (Chloe Lanier) son.

Brad won’t want his scheme with Nelle to be exposed, but he won’t like the idea of handing Jonah over to the birth mom either. He’ll realize he’s going to need backup if he wants to figure out a solution. Once Brad’s backed into a corner, he’ll turn to Julian (William deVry) for help. Next week, General Hospital spoilers say Brad will spill the shocking story and leave Julian with a dilemma of his own.

GH fans know Julian’s been trying to stay on the right path. Kim’s (Tamara Braun) counting on Julian to avoid trouble and focus on a brighter future. Nevertheless, Julian can’t stand by and watch Lucas (Ryan Carnes) suffer. If there’s a way to prevent pain for his son, Julian has to find it. He’ll decide to kick off an investigation and hopefully learn the identity of the birth mother.

This mystery mom undoubtedly feels guilty for giving her baby up. Julian may think “Brucas” can keep the kid if they relieve the guilt. These dads agreed to the birth mom’s terms, which included anonymity on her end. However, Brad might be able to set up a meeting or even just show up at her door. Since she’ll already plan on taking “Wiley” back, it’s not like violating the terms will matter.

Of course, Brad will need Julian to make this happen. Alexis will obey the birth mom’s orders, so she won’t be offering up any identity clues. If Julian wants to know, he’ll have to get sneaky. Can Julian pull off this desperate plan? Will he give Brad the chance to speak with the birth mom and prompt another change of heart?

It seems likely that Brad will prove they’re devoted parents. He should be able to keep “Wiley” at home, but the kid’s certainly not where he belongs. How will the truth ultimately be revealed to Michael? We’ll give you updates as other General Hospital details emerge. Stick with ABC’s GH and don’t forget to check CDL often for the latest General Hospital spoilers, updates and news.