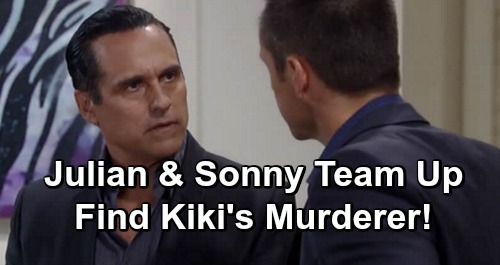 General Hospital (GH) spoilers tease that Sonny (Maurice Benard) and Julian (William deVry) may be teaming up soon. These two haven’t always seen eye-to-eye, but they will certainly be united on one important front…they’ll both want to see Kiki’s (Hayley Erin) killer hunted down and eliminated. Julian in particular will want his niece’s murderer to be identified, and he may consider teaming up with Sonny to get the job done.

It will soon become apparent that Griffin (Matt Cohen) isn’t the guilty party, and that someone went to great lengths to set him up for Kiki’s murder. It looks like Ava (Maura West) will be suspected next, after her drugging of Sasha (Sofia Mattsson) and her scheme to break up Kiki and Griffin comes to light. But Julian won’t buy that his sister was involved, and he’ll probably feel that the police aren’t getting the job done.

That’s why it makes perfect sense for Julian to branch out on his own and start his own investigation. Since he’s officially out of the mob, he could use some help, and it makes sense that he’d turn to Sonny for assistance despite their differences. Sonny’s well-connected and was quite fond of Kiki as well.

It will be interesting to see what happens if the two men put their heads together and start looking into the killing. So far, the Port Charles PD hasn’t connected Kiki’s murder with Mary Pat’s (Patricia Bethune) murder, largely because they’re singly focused on Griffin as a suspect. And since Jordan (Briana Nicole Henry) will next focus on Ava, it will be a while before they’re ready to connect the two murders.

But together, Julian and Sonny might make more headway. Both murders were brutal and the bodies were staged for public viewing. If they pull Jason (Steve Burton) in to help in the investigation, he may be able to notice a connection and put them one step closer to finding the killer.

Of course, the big problem with both the police investigation and the Julian/Sonny investigation is that no one would ever suspect that “Kevin” (Jon Lindstrom) would be involved in murdering anyone. Ryan’s been careful and he’s completely got the upper hand right now. Except for some bruising on his wrist from Kiki’s murder, there’s really nothing about him that would arouse any suspicion.

Whether Julian and Sonny team up and forge their own investigation remains to be seen. Would you like to see them partner and hunt down Ryan? Stay tuned to the ABC soap and don’t forget to check CDL often for the latest General Hospital spoilers, updates, and news.