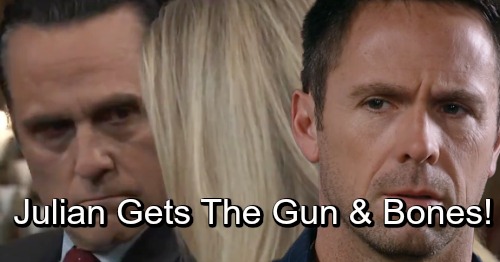 General Hospital (GH) spoilers tease that Julian Jerome (William DeVry) may be down, but he’s not out. Sonny Corinthos (Maurice Benard) has been blocking his construction plans at every turn, but Julian has no intention of giving up. He’ll do whatever it takes to expand Charlie’s Pub, so Sonny had better stay on guard.

Julian was already frustrated by all the setbacks, but the latest one really set him off. The inspector claimed the earthquake caused a fissure under the building, but Julian didn’t buy that for a second. There was no damage before this inspection, so he definitely smells a rat named Sonny.

Julian confronted Sonny, who denied having anything to do with the expansion issues. That won’t matter to Julian in the end. Whether Sonny ever admits it or not, Julian knows what’s up and intends to fight back. He delivered a veiled threat, so Sonny should be prepared for trouble.

GH fans know Sonny wants to keep his secret buried. Mike Corbin (Max Gail) put the body and incriminating weapon under the pub’s foundation with a little help from Charlie Delaney. Since Julian is aware of Mike and Charlie’s connection, he’ll be anxious to learn more. Julian should realize this is his ticket to gaining the upper hand. He just wants to expand his pub without Sonny’s interference.

Of course, this war could lead to more problems than Julian anticipates. After all, Sonny and Jason Morgan (Steve Burton) agreed that deadly action could be taken if necessary. Julian will have to be extremely careful. Nevertheless, he doesn’t quite know what he’s getting himself into yet. That means Julian will move full-speed ahead and try to find a way around Sonny’s meddling.

Several months ago on General Hospital, Jim Harvey (Greg Evigan) approached Julian about buying the pub. Julian turned him down as well, but it’s possible he kept Harvey’s business card. He may be aware that Niagara Equities returned all assets, property, materials, capital and equipment to the City of Port Charles.

Julian might mull it over and determine that the company still exists. He may see this as a new strategy to work around Sonny’s sabotage. They would have the equipment and knowledge necessary to perform an underground sonar. The company could either confirm or deny the fissure’s existence and location.

Julian may reach out to Steven Blake (Pressly Coker), the young man who met with Franco Baldwin (Roger Howarth). Steven was one of Harvey’s first victims as well as the vice-president of finance at Niagara Equities. Since Niagara was in bankruptcy at the time, Steven would be more than happy to hear from Julian and score this job.

Unfortunately for Sonny, this process could reveal skeletal remains! If what’s left of the corpse turns up, it shouldn’t take Julian long to guess that’s what Sonny was hiding. Since Julian’s trying to stay on the straight and narrow, perhaps he can work out some sort of deal with his enemy. Julian has a heart these days, so he’d probably feel bad about getting Mike caught in this mess.

Julian might make sure the gun conveniently disappears. Since that gun could have traces of DNA evidence, that’s what Sonny’s actually concerned about. Without that weapon, there’ll be absolutely nothing to tie Sonny or Mike to this crime.

Julian could promise to keep that weapon out of the cops’ hands if Sonny agrees to a real truce. His pub plans could move forward, but Sonny might still have some fears. Could he trust that Julian won’t drop that bomb later? It’d be some useful blackmail material to tuck away for safekeeping.

Sonny certainly wouldn’t like the idea of letting Julian keep this leverage forever, but what could he do? His only options would be live with the circumstances or plot Julian’s murder. The latter sounds awfully messy!

No matter how it all plays out, General Hospital spoilers say Julian will inevitably learn Sonny’s secret and cause major drama. Are you ready to watch their bitter battle heat up? We’ll give you updates as other GH news comes in. Stick with the ABC soap and don’t forget to check CDL often for the latest General Hospital spoilers, updates and news.