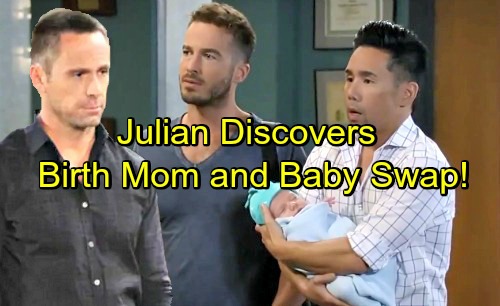 General Hospital (GH) spoilers tease that Brad (Parry Shen) and Lucas (Ryan Carnes) are in for a rough time. After Alexis (Nancy Lee Grahn) gets some awful news, she’ll have to pass it along. It seems likely that it’ll be about the birth mother. GH has been dropping plenty of anvils about the mom taking her baby back, so there’s a good chance the show wants to play this part of the story.

However, the real drama will come from Brad’s big secret. Since he swapped Wiley for Jonah, he’ll be torn about what to do next. On a new GH episode August 20, Brad will seek help from a surprising source. He’ll turn to Julian (William DeVry) and hope he can get some beneficial guidance.

Brad will be desperate for a way to fix his mess and preserve his new family, but can Julian help him out? General Hospital spoilers say he’ll certainly try! It’d be risky for Brad to divulge the truth about the baby swap, so he may need advice about something else. Brad won’t want to spill the beans to anyone if he doesn’t have to. Instead, he’ll probably hope he can somehow change the birth mom’s mind.

Of course, that’s going to be difficult since Brad doesn’t know this woman’s identity. Perhaps that’s where Julian will come in. General Hospital spoilers say Julian will kick off an investigation on August 21. He’s already been curious about the birth mom, but he hasn’t nailed down any details on who she is.

Alexis knows, but that’s not something she can disclose. Anonymity was part of the adoption deal, so Alexis may not be willing to blab – especially not to Julian. We can’t forget that he’s supposed to be keeping his distance. General Hospital seems to be ignoring that part of the agreement, but maybe they’ll use that to make matters worse for Brad eventually.

Regardless, Julian will do some digging and hope he can come up with the answers he’s seeking. Perhaps Julian will seek out the birth mom’s medical records, which could lead to a shocking discovery. If there’s something that doesn’t match up with “Wiley’s” records, Julian could realize something’s up.

Still, Julian could deliver a name to Brad at some point. If Brad can sit down with the birth mom and make her see that “Wiley” is already part of their family, she might have another change of heart. Then, Brad would just have Julian to contend with!