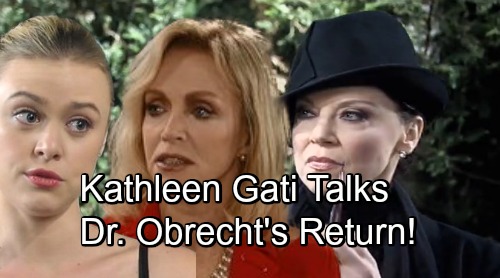 General Hospital (GH) spoilers tease that Dr. Liesl Obrecht (Kathleen Gati) will soon be making a return to Port Charles. Obrecht got herself into a world of legal trouble when she kidnapped Peter (Wes Ramsey) out of revenge for Nathan’s (Ryan Paevey) death. In a shocking turn of events, she vengefully held and tortured Peter in a remote cabin for weeks.

But lately, Obrecht has been on the run and out of sight. Viewers will remember that Obrecht has been on the lam ever since she overpowered her security detail while being transferred from Port Charles to Pentonville. This caused the van transporting her to crash, running the car occupied by Michael (Chad Duell) and Nelle (Chloe Lanier) off the road.

With her security detail injured and unconscious, Obrecht escaped on foot and soon encountered Nelle in the woods, who was in labor. Obrecht reluctantly helped deliver Nelle’s baby, then was on her way. She hasn’t been seen since.

But that’s about to change. According to a recent article in ABC Soaps In Depth, Obrecht will make another appearance any day now. How and when she’ll return is anyone’s guess, but it may have something to do with the baby switch storyline. Obrecht knows that Nelle’s baby was really born alive, so she could hold the key to Michael finding out that his son survived.

But what’s in store for Obrecht beyond her next appearance? It seems to be up in the air. Kathleen Gati, who portrays Obrecht, recently indicated that she’s up for future appearances as the devious doctor. As reported in ABC Soaps In Depth, Gati recently stated that “I love to do other stuff, but this [GH] is my No. 1 show.”

Gati also told Frank Valentini, GH’s executive producer, that despite having other projects in the works, “anytime you want me, I’m here.” That’s (hopefully) good news for GH fans! It would be great to see Obrecht back on canvas, causing more havoc in Port Charles. She’s a great devious villain!

And what about the “other stuff” that Gati is working on? She told ABC Soaps In Depth that “I’m starting another audiobook, and I have stuff coming up that I’m not privy to speak about…I’m going to be pretty busy for the next little while.”

Are you excited for Obrecht’s next appearance? Chances are, she’ll stir up the drama! Stay tuned to the ABC soap and don’t forget to check CDL often for the latest General Hospital spoilers, updates, and news.