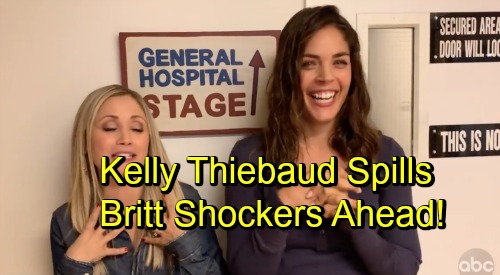 General Hospital (GH) spoilers tease that Britt (Kelly Thiebaud) will continue to stir up trouble in Port Charles. Now that Britt’s earned her freedom through a shocking deal, she’s bound to make a few more waves. Britt already got a Margarita pitcher shower courtesy of Lulu (Emmy Rylan). She may face some other awkward run-ins, but she’ll have some moments of happiness, too.

In an interview with Soap Opera Digest, Thiebaud talked about her return to General Hospital. She admitted she’d been in touch with Frank Valentini, GH’s executive producer, since her last stint in 2017. They had talked about the possibility of Britt making a comeback, but Thiebaud wasn’t sure if or when it might get the green light.

Thankfully, Thiebaud got the call and reported back to set. It turns out the first day of her return stint came with a crisis! Thiebaud’s car wouldn’t start, so she was running a bit late. She ended up running into some familiar costars before shooting her scenes, which more than made up for her transportation dilemma.

Thiebaud also had good things to say about Finola Hughes (Anna), who she worked with quite a bit during this stint. She was excited for their characters to team up. Thiebaud gushed, “She is a legend! Absolutely love that woman. We got to really play and have some fun.”

Speaking of fun, General Hospital spoilers say this week will bring a Britt and Brad (Parry Shen) reunion. Thiebaud was thrilled about that as well. “It was so fun, like time had never passed,” Thiebaud said. “Wish we could do that more often!” During their upcoming chat, Brad will divulge a secret that catches Britt off guard. It sounds like Britt may hear about the baby swap and offer some advice.

Of course, the latest Sasha (Sofia Mattsson) drama has raised some eyebrows for viewers. She isn’t Nina’s (Michelle Stafford) daughter and she bears a striking resemblance to Britt. Could there be a deeper Sasha and Britt connection?

Thiebaud couldn’t share anything on that, but she did have a message for GH viewers. “I am so lucky to have such wonderful support from the fans,” Thiebaud said. “I thank them and I’m very excited for them to see what we shot!”