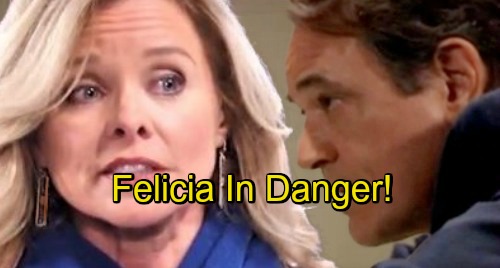 General Hospital (GH) spoilers tease that Felicia (Kristina Wagner) will find herself in grave danger along with the rest of Port Charles. GH fans have been wondering which twin was being held at Ferncliff. The show finally offered an answer, but it came with quite a twist.

Ryan (Jon Lindstrom) was initially pretending he was captive Kevin (Jon Lindstrom), but General Hospital revealed that Kevin was actually holding his brother there. Dr. Collins still believes Ryan can be redeemed, but he obviously underestimated his evil twin. GH pulled off another shocker when Ryan got the upper hand and knocked Kevin out cold.

General Hospital viewers can see where this is going! Ryan was the trapped one, but now GH will apparently shift gears and let Kevin suffer in that padded room. Since Ryan’s been claiming he’s Kevin, the real Kevin’s pleas will fall on deaf ears. Gordon the orderly will just assume he’s getting the same old story.

Meanwhile, Ryan can run amok in PC. He hinted that Kevin should test his redemption theory by letting him out into the world. Ryan argued that it was the only way to find out if he still had murderous tendencies. Of course, Ryan hasn’t changed a bit. Since he’ll be impersonating Kevin now, he’ll undoubtedly put some deadly plots in motion. Ryan should be thrilled with his sneaky power.

General Hospital gave Felicia plenty of flashback scenes in Tuesday’s episode. It’s clear that she’s going to be a major player in this storyline, which is fantastic. GH fans are always anxious to see vets and history worked into current stories. That’s the good news! The bad news is that Felicia’s life could be on the line. The same goes for Felicia’s loved ones like Maxie (Kirsten Storms) and even little James.

Ryan will show no mercy as he unleashes his wrath and has some wicked fun. General Hospital spoilers say Carly (Laura Wright) could suspect something’s up pretty soon. She’ll be a key part of Ryan’s stunning exposure. Of course, we’ll also see Laura (Genie Francis) reenter the picture eventually. You can bet she’ll be unsettled by the strange changes in her husband.

Bottom line, Ryan will be back to his old tricks and that can only spell trouble for Port Charles residents. General Hospital spoilers say extreme peril is looming, so don’t miss all the action ahead. We’ll give you updates as other GH details emerge. Stay tuned to the ABC soap and don’t forget to check CDL often for the latest General Hospital spoilers, updates and news.