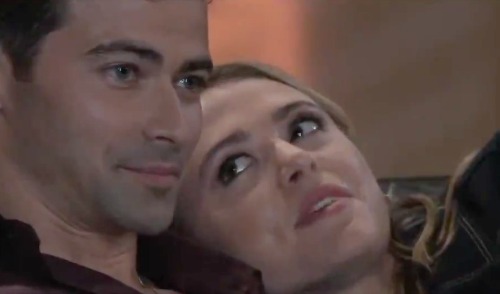 General Hospital (GH) spoilers tease that Griffin (Matt Cohen) and Kiki’s (Hayley Erin) relationship will keep moving right along. Kiki finally decided she was done dancing around her feelings for Griffin. She wanted more than friendship, so she made her big move. Thankfully, Griffin was secretly pining for more as well. It all came together for these two, so they’re on cloud nine at the moment.

Kiki and Griffin will get to know each other a little better this week. They recently went for a jog and admitted that they still have a lot to learn. That’s why Griffin wants to go slow and make sure they do this right. He’s in this for the long haul, so he didn’t want to cheapen it by rushing into bed again. Their post-Nurses’ Ball hookup was consensual and powerful, but it’s not a night Griffin’s proud of.

However, the former priest won’t be able to resist Kiki for long! General Hospital spoilers say there’ll be a change of plans soon. Griffin and Kiki were supposed to attend a film festival together, but they’ll ultimately realize there’s been a mistake.

Since Griffin purchased the wrong tickets, they’ll opt to skip the weird and boring flick they’d have to sit through. Kiki will think they’d be happier with a movie night at her place instead. Naturally, Kiki will choose an incredibly romantic film for them. She’ll set the mood and perhaps give Griffin a hint to pick up on. They’ll share some close moments, so you can probably guess where this is headed.

General Hospital spoilers say Griffin and Kiki will cave in. They’ll indulge in a second round of lovemaking, but things will be a bit different this time. There’s nothing holding these two back anymore. Kiki and Griffin don’t care what Ava (Maura West) thinks, so there’s no forbidden element. They’re just two people falling for each other, which means this sex session will be more meaningful.

Of course, this is just the calm before the storm. Now that Ryan’s (Jon Lindstrom) tightening his grip on Ava and her vengeful desires, trouble is undoubtedly brewing. GH could have a deadly outcome in mind for Kiki. Regardless, Griffin and Kiki’s romance is doomed!

How do you feel about Kiki and Griffin as a couple? Hot or not? Are you bummed that their happiness will be short-lived? We’ll give you updates as other GH news comes in. Stay tuned to the ABC soap and don’t forget to check CDL often for the latest General Hospital spoilers, updates and news.