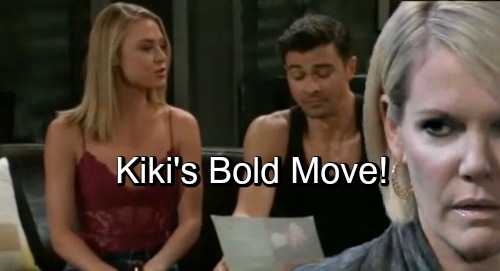 General Hospital (GH) spoilers tease that Kiki (Hayley Erin) won’t be able to get Griffin (Matt Cohen) off her mind. She was concerned she might lose his friendship after the whole courtroom fiasco and all the Ava (Maura West) fallout. That’s why Kiki made an effort to keep it intact.

Fortunately, Griffin was on board with that plan. They’ve always had a special connection and that connection is clearly growing stronger. Of course, the situation is complicated thanks to Ava. She was furious when she found Griffin at Kiki’s apartment. Ava thought about making amends with Kiki, but her intentions went right out the window over this latest round of betrayal.

On the bright side, Kiki will be free to move on now. She won’t care what Ava thinks since her mother disowned her. In fact, Ava’s rage may be an underlying factor in Kiki and Griffin’s romance. Kiki would probably be lying if she said revenge wasn’t a teeny-tiny part of this. She surely wants to stick it to Ava, even if that’s not the main reason she’s drawn to Griffin.

During the week of October 1-5, General Hospital spoilers say Kiki will make a bold move. She’ll decide she’s tired of waiting around, so she’ll work to take things to the next level. Will Kiki ask Griffin out on a date? Could she plant a kiss on him and hope it leads to another night of passion?

Griffin and Kiki are both single, so there’s nothing holding them back. At least that’s how Kiki will feel about it! Griffin may be a bit more reluctant due to the Ava drama. He might feel like there’s still a chance Kiki and Ava can work through their issues. Griffin wouldn’t want to get in the way of a mother-daughter bond.

However, you can bet Kiki will put Griffin’s mind at ease. She has no plans to include Ava in her life. Since Kiki could be Nina’s (Michelle Stafford) daughter, that could really seal the deal on cutting Ava out. That potential GH shocker’s still to come, but Kiki and Griffin will focus on their relationship for now.

According to a tweet from General Hospital’s Twitter account, Matt Cohen and Hayley Erin recently shot some scenes outside together. GH loves to use park scenes to advance a romance. Love is in the air when a duo takes it outside, so it sounds like Griffin and Kiki are headed in the right direction.

Do you like the chemistry between these two? Are you rooting for Kiki and Griffin as a couple? We’ll give you updates as other GH news comes in. Stay tuned to the ABC soap and don’t forget to check CDL often for the latest General Hospital spoilers, updates and news.