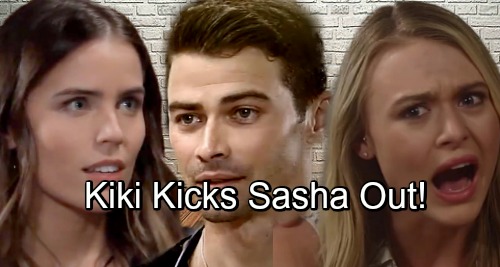 General Hospital (GH) spoilers tease that Sasha’s (Sofia Mattsson) about to rock the boat in more ways than one! Her scheme with Valentin (James Patrick Stuart) was recently revealed, so some juicy details should come out eventually. However, someone besides Nina (Michelle Stafford) is being duped. Sasha is also playing her new “sister” and roommate, so some Kiki (Hayley Erin) drama’s ahead.

During a chat with Nina, Sasha talked about bonding with Kiki. She added that she was growing closer to Griffin (Matt Cohen) as well, but her interest in him bothered her “mom.” Nina pointed out that Griffin was Kiki’s boyfriend. She hoped Sasha wouldn’t interfere, but the brunette beauty suggested nothing serious was going on. Ava (Maura West) told her so, which is exactly the problem.

Nina told Sasha she shouldn’t listen to a word Ava says, but something tells us Sasha won’t take that advice. Ava may approach Sasha again and give her another nudge toward Griffin. Since we now know Sasha’s a schemer, she may view Ava as a kindred spirit. On soaps, people with a dark side tend to gravitate toward one another. Sasha may even get some tips and tricks from Kiki’s estranged mother.

Whatever the case, the sisterly bubble will eventually burst. General Hospital spoilers say Kiki will make some startling accusations on November 16. Sasha will rush to her own defense and object to Kiki’s allegations. She may contend that her “little sis” is way out of line.

There’s a good chance Griffin will be at the center of this conflict. Kiki already spotted Griffin helping Sasha with her necklace. Her hair got caught in it, so she requested some assistance. Griffin later helped Sasha with a cramp during their run.

Kiki’s not fretting about any of these minor moments just yet, but she will later. Once Kiki’s onto Sasha’s game, she’s not going to be happy about it. Kiki will inevitably feel like Sasha’s been making plays for her man. Perhaps there’ll even be some extra compromising situation that Kiki walks in on.

Kiki will undoubtedly declare Griffin off limits and possibly kick Sasha out. She may excuse Griffin’s behavior and put all the blame on her shady “sister.” Will Kiki just make matters worse? Sasha seems like the kind of gal who’d hold a grudge. She might step up her efforts and make Griffin her conquest just to spite Kiki.

General Hospital fans won’t want to miss the next phase of this exciting storyline. We’ll give you updates as other GH news comes in. Stick with the ABC soap and don’t forget to check CDL often for the latest General Hospital spoilers, updates and news.