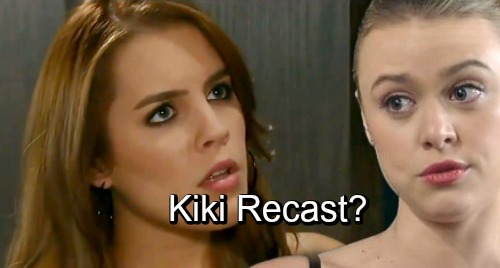 It looks like Hayley Erin’s leaving General Hospital to focus on her new show, Pretty Little Liars: The Perfectionists. That could open the door for a Kiki recast. It’d be great if GH could get someone who’s already been in the role before, so that brings us to Kristen Alderson.

Back in June, an ABC Soaps in Depth interview offered some intriguing info. Alderson, who previously played Kiki as well as Starr Manning, said she’d love to make a GH comeback. She’d prefer to reprise the part of Starr, but she’d probably be up for a Kiki reboot. That’s what General Hospital will need most pretty soon.

Alderson was the original Kiki, so she could slide right back in the role and keep the drama going. Maybe she’ll be waiting in the wings when Erin most likely departs. When Erin took over as Kiki, the transition went smoothly. The actresses look nothing alike, but it didn’t seem to matter. General Hospital fans are used to recasts, so sometimes the show doesn’t bother with a plastic surgery excuse.

However, this would actually be a good time to use that soapy explanation. Erin’s been in the role for a while now, so adjusting again might be tough. It might help to take the mutilated face and reconstruction route. As luck would have it, we’ve got evil Ryan around to handle that sinister task.

Maybe Ryan will attempt this murder, but get stopped in the process. Kiki could be rescued in the nick of time, but her face may not be so fortunate. Ryan cut off Mary Pat’s (Patricia Bethune) head, so he might try to do the same to Kiki. If she fights him off, she could end up with some major facial wounds.

Kiki could end up bandaged and in need of extensive surgeries. That would provide an explanation if Kiki awakens with a new face – whether it be Alderson’s or someone else’s. After all, General Hospital could always go with a fresh recast.

Regardless, there may be a great reason to keep Kiki on canvas. She might turn out to be Nina Reeves’ (Michelle Stafford) real daughter. Nina’s already been through so much, so it’d be a shame for her reunion to be dashed again. If Kiki’s her kid, Nina deserves the chance to know and bond with her.

Perhaps Valentin Cassadine (James Patrick Stuart) could even use the situation to his advantage. His Sasha Gilmore (Sofia Mattsson) scheme will inevitably blow up, but maybe he can score points by helping Kiki. Valentin has Russian clinic connections, so Kiki’s brand-new face is just a phone call away.