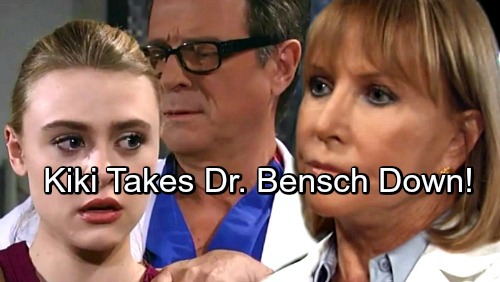 General Hospital (GH) spoilers tease that Kiki (Haley Erin) will face a significant misunderstanding. Since Kiki’s stuck in Dr. Bensch (James DePaiva) drama, this info undoubtedly relates to him. Dr. Bensch recently lashed out at Kiki, but he was quite pleasant the next time they talked. Kiki will likely let her guard down now that Dr. Bensch is being civil. She’ll feel like things are going to work out.

Of course, GH isn’t just doing to drop this. There’s no way they’ll let Kiki continue the shadow program in peace. It’s only a matter of time until Dr. Bensch makes another creepy move. General Hospital spoilers state that Kiki’s actions will be misconstrued, so perhaps Dr. Bensch will once again pull something. He might go for another kiss or ask for a date.

Dr. Bensch may mistake Kiki’s respect for interest again – or at least claim he’s mistaken! It’s clear that this guy’s just a perv who can’t keep his hands to himself. Dr. Bensch might even try to bargain with Kiki. He could push for sexual favors in exchange for a glowing recommendation at the end of the program. Dr. Bensch is obviously only focused on what Kiki can offer him sexually.

General Hospital spoilers say Kiki will shut down the misunderstanding we mentioned, so it sounds like she’ll stand up to the doc. Later, Kiki will rely on an old pal for support. She’s been close to Griffin (Matt Cohen) for a while, but maybe this friend goes back even further. Michael (Chad Duell) might be available for a chat.

Kiki will have a lot to mull over, so she may unload a few of her problems. She may not share the whole story, but she’ll still want some form of advice. No matter who gives Kiki guidance, she’ll inevitably be told to follow her instincts. Kiki needs to get away from Dr. Bensch before he goes too far!

On May 23, Kiki will be pushed to her limit. General Hospital spoilers say she’ll make an impulsive decision that brings a shocker. Perhaps Dr. Bensch will once again cross the line. As a result, Kiki may determine that she’s had enough. She might quit the shadow program on the spot or even march over to Monica’s (Leslie Charleson) office to file a complaint.

Whatever the case, it looks like Kiki will take charge. That’s great news, but will Dr. Bensch retaliate? Something tells us this is far from over! We’ll give you updates as other GH details emerge. Stay tuned to the ABC soap and don’t forget to check CDL often for the latest General Hospital spoilers, updates and news.