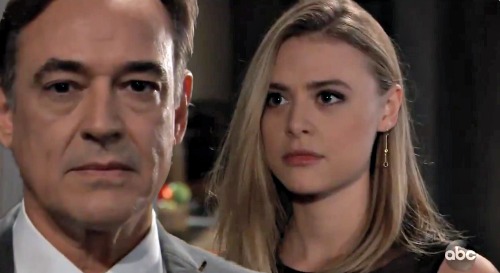 General Hospital (GH) spoilers tease that Ryan’s (Jon Lindstrom) change of plans could bring more than he bargained for. GH fans know Ryan was previously obsessed with Felicia (Kristina Wagner). When he kicked off this twin swap, Ryan seemed ready to focus solely on Felicia and bring serious misery.

However, it wasn’t long until Ava’s (Maura West) twisted mind stole Ryan’s heart. Now they’re beginning a romance, but neither one of them knows just how dangerous it is! They’ll pose major threats to each other’s happiness as this storyline continues.

On Monday’s GH episode, November 26, Ava admitted it was going to be hard staying in Port Charles with Kiki (Hayley Erin) around. Her scheme to make Kiki believe Griffin (Matt Cohen) cheated didn’t turn out like she’d hoped. Ava suggested it’d be easier if she left – or if Kiki wasn’t there. That was all Ryan needed to hear. He immediately bolted over to Kiki’s apartment, so big trouble’s brewing.

Whether Kiki’s murder happens now or later, it’s pretty clear that it’s coming. General Hospital has dropped plenty of deadly clues over the last couple months. Of course, Ava wasn’t pushing for Kiki’s demise. She undoubtedly meant Kiki should be the one to leave town, but that’s not Ryan’s style. He’d much rather have some ghastly fun and satisfy his dark desires.

Once Kiki inevitably bites the dust, Ava should battle plenty of guilt, sorrow and anger. She may be sorry she wasted so much time near the end. Unlike Ryan, Ava has some good in her. The aftermath of Kiki’s probable murder should really show off Ava’s softer side.

It’s doubtful Ryan will like that side of Ava much. He may try to drag her back into the darkness, which could raise suspicions. Ava may see that “Kevin” has become quite cold and calculating. He’s not just supportive of who she is; he’s downright evil and embraces the immorality of the world.

Ava may not be the one to figure out “Kevin’s” real identity, but she’ll learn the truth eventually. Once that happens, Ava may unleash her wrath in a big way. She’s not as wicked as Ryan at her core, but she can bring that part of herself out when she needs to. Ava could certainly bring it out for revenge.

Right now, Ryan must feel like Ava’s a wonderful surprise. He may change his tune down the road. Ava could easily kill Ryan or at least be the reason he gets caught. If someone tips her off to who Ryan is and what he’s done to Kiki, Ava may make it her mission to make this murderer pay – perhaps with his life!