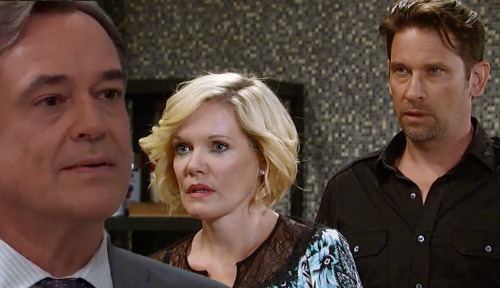 General Hospital spoilers tease that in the not-too-distant future, Ryan Chamberlain (Jon Lindstrom) masquerading as his twin Kevin (also Jon Lindstrom) will take down a much-loved GH character. Considering Hayley Erin has been reported to be leaving General Hospital because her new gig, “Pretty Little Liars: The Perfectionists” is going to take up more of her time than she anticipated, it may be Kiki!

Other General Hospital spoilers tease that Ava will have a new drinking partner, and that may be Ryan. In her first therapy session with who she thought was Kevin, she poured out her heart and bared her soul, telling him that trying to play the good little girl wasn’t working for her, since she couldn’t seem to overcome her inner dark side and the reputation that went along with it.

Ava also told him about the pain and betrayal she felt when her grown daughter Kiki slept with her boyfriend Griffin Munroe (Matt Cohen) and how she cut Kiki off and felt nothing but revenge and desire for retribution for the both of them. Ryan counseled her in so many words to do her own thing and be herself, and not worry what others thought or felt, dangerous words to tell Ava!

Ryan seemed very impressed with not only Ava’s beauty, but her dark and depraved soul. It seems that Ava may have turned his head and he quite possibly feels a connection to her inside as well! The two may even bond, feeling that each understands each other in a way no one else ever has and also may have an affair.

Ryan’s twisted enough that he might think that murdering Kiki would be doing a favor for Ava, and that she would be pleased or impressed with him. But that may be the farthest thing from the truth – and he’ll find out he didn’t know the real Ava at all, just one side of her.

Even though Ava is angry at Kiki and cut her off from her life and from having a relationship with her baby sister Avery Corinthos (Ava and Grace Scarola) it doesn’t mean she doesn’t love Kiki. She just can’t feel her love through all the anger. And then there’s another problem Ryan will bring upon himself…. his sole male patient, Franco Baldwin (Roger Howarth), who himself used to be a serial killer in his own dark past.

One thing Ryan doesn’t know, at least not yet, is that Ava and Franco were once involved—not only were they involved, but Franco believed Kiki was his and Ava’s daughter for most of Kiki’s life. Even though that was proven not to be true, the bond is still there and Franco still thinks of Kiki as his daughter.

So if and when Kiki’s murder does happen, Ava and Franco will both be out for revenge against the murderer. It may be enough to drive Franco back to the dark side, in spite of his love for Elizabeth Webber (Rebecca Herbst).

If they find out that Ryan, or his Kevin persona murdered Kiki, GH fans can be sure that Ryan will pay the piper when Ava and Franco’s dark sides join forces. Stay tuned to GH and check General Hospital spoilers frequently to see how the twisted Dr. Ryan Chamberlain may get a mega dose of his own medicine!