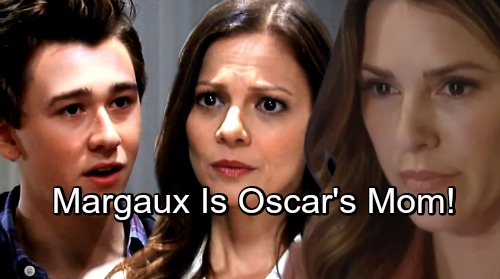 General Hospital (GH) spoilers reveal that Kim’s (Tamara Braun) hiding something huge. GH viewers have always suspected there was more to Kim’s story. She seemed cagey from the get-go, so it should come as no surprise that she’s keeping a major secret.

Fortunately, that secret will finally be revealed next week. General Hospital spoilers say Kim will come clean about a devastating shocker, so this could be a big part of her past. Does Kim’s secret involve Oscar (Garren Stitt)? It’s possible Kim isn’t his real mother! There have been some clues that point in that direction, so let’s look at a few of them.

When Kim first encountered Jason (Steve Burton), she believed he was Drew (Billy Miller) and quickly became jumpy. Just after Kim bailed on the Thanksgiving bash with Oscar, she suggested everything would be fine as long as they were together. Kim had a strange look on her face as she pulled Oscar close.

Why was Kim so freaked out initially? What would make her think Oscar could potentially be separated from her? Perhaps it’s because she knew Drew was the only biological parent in the picture. Maybe Kim agreed to raise Oscar for another woman and has been keeping that bombshell under wraps.

Of course, that could force another stunning revelation. If Kim isn’t Oscar’s real mother, someone else has to be. That someone could already be in Port Charles! General Hospital fans will recall that Kim sort of recognized Margaux (Elizabeth Hendrickson). She couldn’t quite place her, but she felt like she knew Margaux from somewhere.

What if just after Oscar was born, Margaux approached Kim as a young, desperate mom? Elizabeth Hendrickson could easily pass for several years younger than her actual age, so this storyline would make sense. No matter where Kim was at in her career, she was obviously working toward helping moms and babies. Kim might’ve taken pity on Margaux and decided to help her.

Perhaps Kim can’t even have children of her own, which could be the crushing secret she reveals. She may not confess about Oscar, but she could at least suggest she couldn’t have any more kids. The need to be around babies could’ve led her to become an OB-GYN.

Kim may have just met Margaux one time many years ago, so it’s reasonable to think she wouldn’t remember her right away. There was just enough familiarity to keep the story moving along. Drew’s convinced that Margaux has some buried secrets. Could one of them be that she’s the mother of his child? That’s just the kind of soapy twist GH likes to do, so it’s entirely possible.