General Hospital Spoilers: Kirsten Storms Dishes on Maxie’s Next Romance – Hints At Who Is The Lucky Man 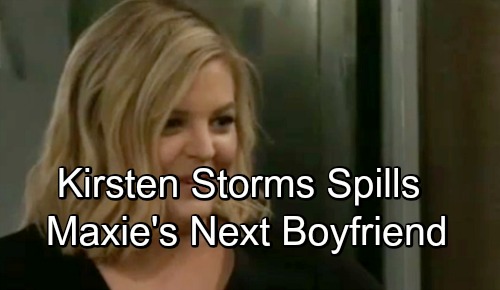 General Hospital (GH) spoilers tease that Peter (Wes Ramsey) may have some competition when it comes to wooing Maxie (Kirsten Storms). Maxie and a shirtless Peter just spent some quality time together stuck in an elevator, and it looks like their relationship may soon be blossoming. But there are some other possible contenders for Maxie’s heart as well.

Kirsten Storms, who portrays Maxie, recently told ABC Soaps In Depth that she enjoys working with Wes Ramsey, who portrays Peter, and she sees potential for a Maxie/Peter romance. “Peter cares about Maxie a lot,” she said. “Now we just have to see how Maxie feels. I will say, she spends a lot of time defending him when he’s not around.”

While a lot of fans are pushing for a Maxie/Peter pairing, there are other possible contenders for Maxie. One is Chase (Josh Swickard), with whom Maxie has had several scenes of late. In the Soaps In Depth article, Maxie admitted that “they’ve given me too many random scenes with Chase for it to not mean something,” but “the fact that Maxie’s still hanging around and he hasn’t been shirtless? That says something!”

And what about Michael (Chad Duell)? There is certainly a contingent of fans out there who are pushing for a Maxie/Michael pairing. The two recently spent some on-screen time together with baby James, but that seemed to be more about demonstrating Michael’s paternal instincts than about a romantic pairing.

Finally, what about the possibility that Maxie will reunite with Spinelli (Bradford Anderson)? Kirsten addressed that head-on: “That was such a great thing in its time, so I would like to leave it as something we all look back on fondly – and not something we continue to force. And what’s not great about showing exes who share a child and actually get along?”

Who would you like to see as Maxie’s next love interest? Stay tuned to the ABC soap and don’t forget to check CDL often for the latest General Hospital spoilers, updates, and news.