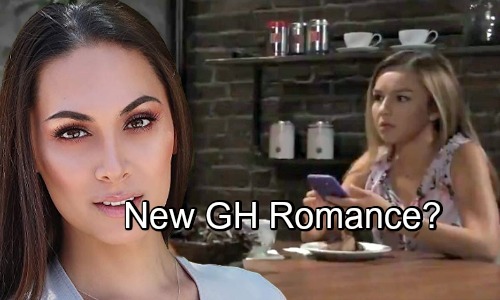 General Hospital (GH) spoilers tease that Kristina Corinthos (Lexi Ainsworth) will follow through on a tough plan. She cares about Parker Forsyth (Ashley Jones), but she’s been feeling left out of her “very full life” in Oregon. Kristina hates to admit that all the naysayers were right, but she can see it was a mistake to move across the country and leave her own life behind.

Kristina may not be revealing the whole story, but it doesn’t really matter. The point is she’s unhappy in her romance, so it’s time for a big change. Sam McCall (Kelly Monaco) intends to provide moral support as Kristina breaks up with Parker and moves her stuff back to Port Charles. It sounds like Kristina will return home, start over and perhaps find new love.

Kristina admitted that she’s gotten good at bartending. It’s not exactly her dream career, but she has a knack for it and her bills get paid. Maybe Carly Corinthos (Laura Wright) will give Kristina a job as Metro Court bartender and show her stepdaughter some support.

Of course, General Hospital could go for another option. Kristina tends to stir up family drama whenever she’s around, so she might do it again by turning to Julian Jerome (William deVry) for assistance. Alexis Davis (Nancy Lee Grahn) would likely object to Kristina working in Charlie’s Pub. She’s made progress with her ex, but that still seems like a recipe for disaster.

Sonny Corinthos (Maurice Benard) would be even more concerned. The last thing he needs is his daughter sniffing around where the body and gun are buried. Sonny wouldn’t want to drag Kristina into his mess, especially since Julian’s determined to fight back.

General Hospital spoilers say that Alexis will continue her efforts to make amends with Kristina. She didn’t approve of Kristina and Parker’s relationship, especially when it took her kid all the way to Oregon. Now that Kristina is splitting up with her partner, that could make it easier for Alexis to patch things up.

Since Parker was Kristina’s professor, their involvement was clearly inappropriate. Even after Kristina was no longer Parker’s student, Alexis had trouble accepting them as an item. However, Alexis is trying to secure a fresh start with Kristina. The next time her daughter gets involved with someone, she may be relaxed about it. If Kristina chooses a GH romance that’s less complicated, that’d be even better.

Could Kristina get together with Dr. Terry Randolph (Cassandra James)? Terry’s new in town, so she could use someone to connect with. Kristina will also be hoping to rebuild her life in PC. They could help each other out. There’s a bit of an age difference, but not as much as the gap between Parker and Kristina. Plus, Terry and Kristina wouldn’t be accused of doing anything inappropriate.

Honestly, Alexis should just butt out of her grown daughter’s love life and let Kristina make her own decisions. After everything that happened with Parker, Alexis may try harder. Terry is transgender and Kristina is bisexual, so they might bond over coming to terms with how they felt. It’d be easy for these two to hit it off.

Will Terry and Kristina be Port Charles’ next LGBTQ couple? We’ll give you updates as other GH news comes in. Stay tuned to the ABC soap and don’t forget to check CDL often for the latest General Hospital spoilers, updates and news.