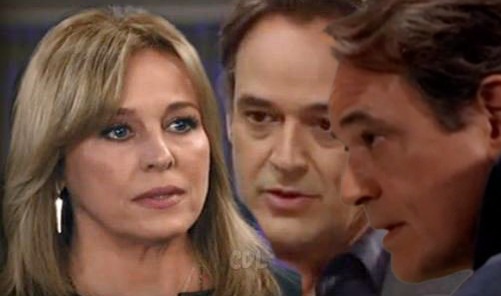 General Hospital (GH) spoilers tease that Genie Francis (Laura) is poised for a powerful comeback. Ever since Laura was abruptly written out, GH fans have been calling for her return. It would’ve been great to see Laura become the mayor of Port Charles, but it appears General Hospital now has something bigger and better in mind. Laura will be front and center in two major storylines this fall.

Frank Valentini, GH’s executive producer, recently offered a few clues to Michael Fairman. GH viewers won’t be disappointed by everything the show has in store for Laura. She’ll get caught in some interesting situations just as soon as she hits town. It won’t take long at all for Laura to get stuck in drama.

Valentini said, “…we are very excited that she is coming back. And yes, we have actually two big stories for Genie, and there is a little bit of overlap in them. When she comes back she jumps right into the big story, and the audience will know what the story is when they see her return.”

Of course, the main one will undoubtedly involve Kevin (Jon Lindstrom). Laura’s hubby isn’t the man he seems to be. It looks like he swapped places with his evil twin, so Laura may realize something’s up soon. She hasn’t been spending a ton of time with Kevin lately, which may be why Laura hasn’t had suspicions already. Then again, maybe she has!

Laura might just be shoving her concerns aside – at least until she can get home and do some investigating. However, Laura would probably never suspect that Ryan (Jon Lindstrom) was masquerading as Kevin. That should come as a big surprise later, but let’s hope Laura’s ultimately the one who figures it all out. She deserves to be a smart sleuth and a real hero.

What about the next storyline, which is supposed to tie in with this one? There could be a way for GH to connect this to Nikolas Cassadine’s (last played by Nick Stabile) return. One revelation could lead to many more. Ryan could have some secrets that put Laura on the path to the truth about her presumed dead son.

Naturally, there are other possibilities as well. The Ryan chaos will stir up some GH history and serve as a good starting point for just about anything. Bottom line, it’ll just be nice to see Laura light up the screen again! She’s an established soap vet who needs to be right where fans can see her.