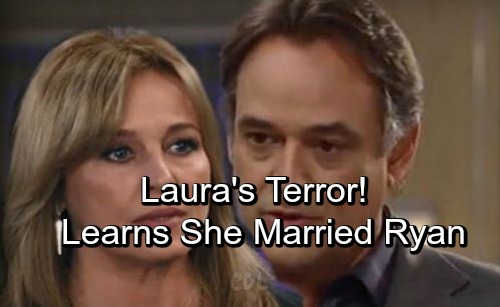 General Hospital (GH) spoilers tease that a shocker could rock Port Charles. Laura Collins (Genie Francis) has to return home sooner or later. When she does, a major revelation could be waiting on her. The mystery patient at Ferncliff could be the real Kevin Collins (Jon Lindstrom)! All signs point to Kevin being held against his will, so there’s a good chance his twin brother has taken over his life.

Ryan Chamberlain was thought to be dead, but that never means much on a soap. GH could easily explain away Ryan’s demise. Depending on when this potential switch took place, Laura could actually be married to evil Ryan. That news would certainly turn Laura’s life upside down.

Ryan was thought to have died in a gas explosion at a fun house, but there are no guarantees. Perhaps Ryan survived or was brought back to life somehow. After all, Dr. Lasaris (Casey Biggs) is lurking at Ferncliff. His name sounds a lot like Lazarus, a biblical character who rose from the dead. It’s possible Dr. Lasaris played a role in reviving Ryan.

Kevin hasn’t been quite himself for a while now. It seemed like the character took a strange turn after seeking Cesar Faison’s (Anders Hove) brain. Was “Kevin” already Ryan at that point? Did the switch happen before the wedding?

Laura had to leave for France soon after they tied the knot. Spencer Cassadine (Nicholas Bechtel) broke both legs, so Laura took off to care for him. That could’ve been a lucky break for Ryan. Laura wouldn’t have had enough time to suspect anything. Her absence might’ve given Ryan a chance to stir up more trouble.

Laura will freak if she learns she married wicked Ryan instead of sweet Kevin. It’d almost be like reliving her forced marriage to Stavros Cassadine (most recently played by Robert Kelker-Kelly). Stavros was a terrible, psychotic man and so was Ryan. This would launch another nightmare for Laura, but how did Ryan fool her?

Kevin wasn’t around from 2004 to 2013, so that’s nine years unaccounted for. Perhaps Drew Cain (Billy Miller) and Jason Morgan (Steve Burton) weren’t the only twins involved in the memory-mapping study. Dr. Lasaris could’ve been the one who helped Helena Cassadine (Constance Towers) with the memory mapping of Drew and Jason. Did he do the same thing to Ryan and Kevin?

Perhaps Ryan was given Kevin’s memories and inserted in PC when the time was right. Then again, maybe Ryan was in the picture ever since “Kevin’s” return to town. If Ryan’s own memories and dark side are breaking through, that would explain the recent changes in the character.

Whatever the case, Laura could have an unpleasant surprise headed her way. “Kevin” has been off visiting her, which could bring Laura’s first suspicions. Will she feel like something’s going on? Could that lead Laura back to Port Charles to follow up on her husband’s strange behavior?