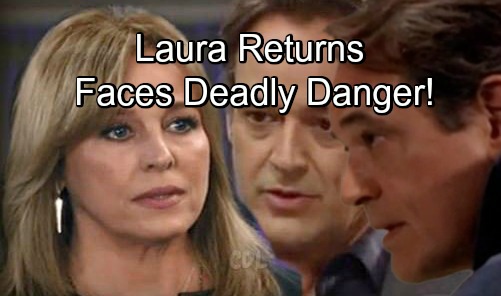 General Hospital (GH) spoilers tease that Laura (Genie Francis) will finally make her way back to Port Charles. She’ll be glad to come home, but she’ll quickly find that she’s missed a lot! Laura’s loved ones will catch her up on all the drama in PC, so she’ll have a chance to process everything. She’ll reach out to anyone she’s been neglecting, especially friends and family members who have faced pain.

However, Laura’s priority will undoubtedly be Kevin (Jon Lindstrom). They hadn’t been married long when Laura took off to care for injured Spencer (Nicholas Bechtel). These two need to do the whole newlywed thing. Laura should be looking forward to a romantic reunion with the man she loves. She’ll likely make some sweet and steamy plans, but a shocker awaits.

GH fans know Kevin’s been working on a secret plot. He tracked down his twin, who turned out to be alive. Ryan (Jon Lindstrom) is a murderous monster, but Kevin believed he could change him. He wanted to give his brother a shot at redemption, but he’s given him a shot at repeating history instead.

Ryan slipped out of his strait jacket and bashed Kevin in the head, so a swap must be brewing. Kevin has made this far too easy! He should’ve known something like this would happen. Nevertheless, it’s too late now. Ryan’s got the advantage, so he’s apparently going to wreak havoc on Port Charles.

Ryan has impersonated Kevin before, so that gives him the edge here as well. Of course, that doesn’t mean it’ll be smooth sailing. Laura is awfully perceptive, so it shouldn’t take her long to suspect that something’s up.

Unfortunately, it could take a while to put the full puzzle together. Laura’s been gone for months and that could be used as an excuse for the distance between them. She may think Kevin’s pulling away because he’s been hurt.

In reality, Laura will be sleeping with the enemy! Ryan may fool Laura initially, but she’ll have to learn about the switch sooner or later. That’ll put Laura in a tricky situation. She’ll be desperate to save Kevin, but can she do it without putting her own life in danger? It’s doubtful!

Still, Laura will press on and fight through the peril. She’ll need to find out where Kevin is and expose Ryan as the doc’s evil twin. General Hospital spoilers say Laura’s search should lead her to Ferncliff, but Ryan will work hard to keep his scheme intact. It sounds like some fun twists and turns are ahead.

Are you eager to see Laura in action? Have you missed having Genie Francis on screen? We’ll give you updates as other General Hospital news comes in. Stay tuned to ABC’s GH and don’t forget to check CDL often for the latest General Hospital spoilers, updates and news.