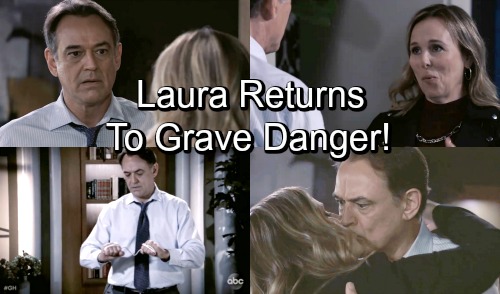 General Hospital (GH) spoilers tease that Genie Francis’ return is almost here! She’ll pop up briefly on Friday, so it sounds like that’ll be part of the week’s big cliffhanger. Francis’ comeback stint will officially begin October 1. As you might expect, Laura will get thrown into a major storyline right away.

GH fans know Laura’s married to Kevin (Jon Lindstrom), but he’s currently trapped at Ferncliff. She won’t realize it at first, but she’ll be reuniting with an imposter! Kevin’s evil twin, Ryan (Jon Lindstrom), will be thrown for a loop when Laura gets home. She’ll arrive sooner than he anticipated, so he won’t really be prepared.

General Hospital spoilers say Ryan won’t exactly give Laura a warm welcome. She’ll naturally be confused by “Kevin’s” bizarre reaction. Laura will suggest that she didn’t think he’d mind an early arrival. After gathering his thoughts for a moment, Ryan will quickly cover his blunder. He’ll assure Laura that he doesn’t mind at all and open his arms for a hug.

Ryan will add that Laura simply caught him at the end of a very trying day. She’ll encourage “Kevin” to open up, but he’ll quickly shift gears. Ryan will push Laura to talk about herself instead. He’ll try to be chivalrous by grabbing her luggage for her in the hallway, so at least Ryan will pull off a couple Kevin-ish moves.

Laura will note that Spencer’s (Nicholas Bechtel) doing much better. He recovered from his injuries and sent Laura packing. Spencer felt like his grandmother was cramping his style! Laura will miss the kid, but she’ll probably be glad to have a break from him. Spencer can be a real challenge to deal with on any given day.

General Hospital spoilers say Laura will just be happy over this homecoming. When Kevin asks how long Laura’s stick around, she’ll shock him with her response. Laura will insist that she intends to stay forever! GH viewers certainly hope that’s the case.

Regardless, Laura will develop more suspicions as time goes on. How long will it take her to uncover the truth? Can Laura help her poor hubby? Will she figure out Ryan’s deception and get Kevin back home where he belongs?

Whether it’s Laura who learns the truth first or someone else, Ryan’s plan is destined to fall apart. We’ll give you updates as other GH news comes in. Stay tuned to the ABC soap and don’t forget to check CDL often for the latest General Hospital spoilers, updates and news.