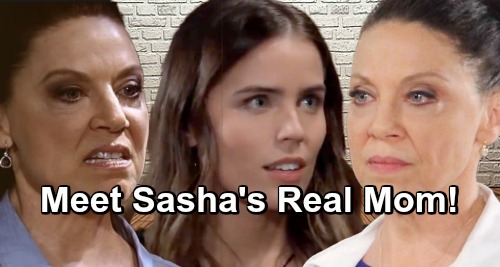 General Hospital (GH) spoilers tease that Liesl Obrecht (Kathleen Gati) is keeping some huge secrets. Could one of them involve a child she’s never revealed before? In a recent GH episode, Liesl taunted Anna Devane (Finola Hughes) during their chat about motherhood. She argued that although her childrearing methods were unusual, at least she always knew where all her children were.

Liesl has a couple kids that GH fans are in the loop on, but could there be another one besides Britt Westbourne (Kelly Thiebaud) and Nathan West (Ryan Paevey)? Liesl made it sound like she possibly had more than just two by using the term ‘all’ instead of ‘both.’ If Liesl indeed has a secret child, it’d fit right in with the current Sasha Gilmore (Sofia Mattsson) saga.

Many General Hospital viewers have noticed the uncanny resemblance between Britt and Sasha. They certainly look like they could be close family members. Some GH watchers have even wondered if Britt might’ve had a baby as a teen. It’s possible that Britt gave Sasha up for adoption and that’s what’s at the heart of this story.

However, Liesl made a point to talk about ALL her children instead of BOTH. That could be a significant piece of this puzzle. The two independent DNA tests showed a 99-percent maternal relation to Nina Reeves (Michelle Stafford). Even Anna acknowledged the DNA proof and confirmed Sasha as a relative.

It seems likely now that Sasha is Liesl’s daughter, which would make her a much younger cousin of Nina as well as Britt’s sister. In the GH episode which aired December 11, Anna and Hamilton Finn (Michael Easton) were talking with Liesl at the PCPD when she demanded her phone call. They teased Liesl about who she would get in touch with.

Anna mentioned that Nina was busy with her grown daughter, which left Liesl looking confused at first. Liesl quickly followed up with a question about the miscarriage, which prompted Anna to spill the DNA evidence news. That made something click into place for Liesl. She knew exactly who to call and it turned out to be scheming Valentin Cassadine (James Patrick Stuart)!

On the new GH episode December 12, General Hospital spoilers say Liesl will deliver a stern threat. She’ll insist that if Valentin doesn’t “spring” her, he can say “auf Wiedersehen” to Nina forever! Of course, Liesl means Valentin will lose Nina for good if she blabs about his deception. Sasha isn’t Nina’s biological child and Liesl could easily know this if Sasha is her own daughter instead.

Did Valentin track Liesl’s secret kid down with the intention of passing her off as Nina’s? Can he get a grip on Liesl’s threat? We’ll give you updates as other GH details emerge. Stay tuned the ABC soap and don’t forget to check CDL often for the latest General Hospital spoilers, updates and news.