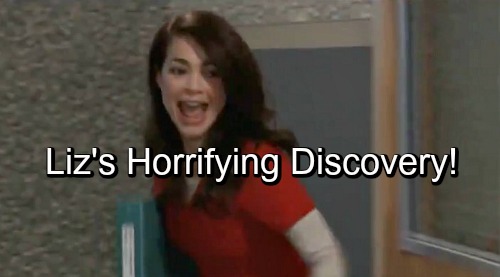 With that in mind, we should look at other victims who might come before Kiki. It’s possible a patient will be transferred from Ferncliff to GH for medical care. However, that seems like an unnecessary step. It’d be simpler to just have a GH staff member get in Ryan’s way.

Ryan doesn’t have any male murder victims in his history, but he did beat up Dr. Steve Hardy (John Beradino) when he trying to get to Audrey (Rachel Ames). Coincidentally, Audrey is Liz’s grandmother, but General Hospital spoilers don’t point to her return at the moment. It’s tough to imagine her suddenly popping up for this.

It won’t be Laura Collins (Genie Francis) either. Although Ryan looked mad enough to kill her when he caught her snooping, Laura will live through their next faceoff. Ryan will opt for a less deadly solution and nudge Laura toward another mayoral campaign. He’ll think that’ll keep her out of his murderous business for a while.

Now that we’ve eliminated a few options, let’s focus on some possibilities. Who might be first to bite the dust at GH? Chances are good Liz will find either a day player of some sort or a minor character we don’t see very often. She might stumble across a dead nurse or med student we don’t really know.

Then again, it could be a nurse who’s a bit more familiar. Nurse Francesca Cavallo (Celesta DeAstis) might fit the bill. We watched her go on a date with Michael Corinthos (Chad Duell) and she helped Kiki by testifying against Dr. David Bensch (James DePaiva). GH fans have seen enough of Francesca to care, but she wouldn’t leave a major hole in the cast. That makes Francesca a great choice to kill off.

Ryan could even pin the murder on Dr. Bensch if he wanted to. Of course, Francesca isn’t the only nurse who pops up from time to time. Deanna (Dioni Michelle Collins) hasn’t been seen in several months, but she might make a comeback for her demise. Nosy Amy Driscoll (Risa Dorken) is another option. She hasn’t had a real storyline in quite some time, so General Hospital could decide to do away with her.

It’s easy to imagine Amy being her usual bubbly self and pushing Ryan over the edge. She can be awfully meddlesome, which is exactly what Ryan doesn’t need. Naturally, Ryan’s anger toward Laura could also trigger a meltdown. It might leave him with a craving for death immediately, so he could take out anyone who’s nearby.