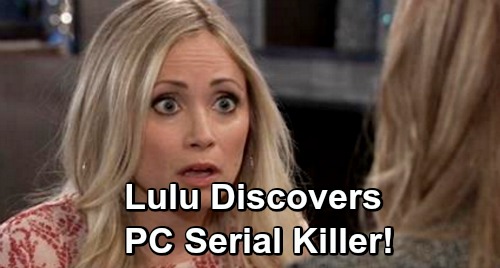 General Hospital (GH) spoilers tease that Lulu (Emme Rylan) could snoop her way into grave danger. As an investigative journalist for the new-and-improved version of The Invader, Lulu’s always looking for a hot story. She does her best to dig for leads and anything that might catch the attention of her readers.

Of course, GH’s murder mayhem is still the talk of the town. Mary Pat (Patricia Bethune) was killed on Halloween and Kiki’s (Hayley Erin) death followed on Thanksgiving. Lulu tried her best to pry info out of Chase (Josh Swickard) during their chat at the PCPD, but he didn’t take the bait.

However, the trip over wasn’t a total waste. A quick peek at Kiki’s file let Lulu see Mary Pat’s name, too. She’ll fill Laura (Genie Francis) in on all this in an upcoming chat and wonder about the connection. Lulu will suggest that there are enough similarities between the two killings to point to a pattern.

Laura will be taken aback to learn there may only be one killer. Little does she know it’s Kevin’s (Jon Lindstrom) evil twin! Lulu will explain that it makes sense when you think about it. She’ll suggest that in both instances, the bodies were moved and left to be found at a party or public event. That tells the cops that the murderer wanted to get the maximum drama out of his handiwork.

Lulu will add that both Mary Pat and Kiki were killed with a knife or blade of some sort. She’ll agree with the PCPD’s assessment that one person may have been behind both murders. Meanwhile, Carly (Laura Wright) will overhear Lulu and Laura’s shocking conversation. She’ll immediately grow concerned about the threat Port Charles is facing.

Carly will contend that she’s sorry to interrupt, but she’ll need clarification on this. She’ll ask if Lulu’s saying that the police are investigating a serial killer. Lulu may point out that they don’t have all the facts yet. She won’t want Carly or anyone else to panic, but she’ll have to admit this looks like the work of a repeat murderer.

Carly may even chime in with some other similarities. After all, she was framed for Mary Pat’s murder when she had a solid alibi. Clumps of Carly’s hair ended up in Mary Pat’s hands, but Carly was ultimately cleared. Griffin (Matt Cohen) was also accused of killing Kiki when the murder weapon showed up in his closet. A deleted selfie eventually got him off the hook.

Lulu may realize that the killer has really done his research and knows exactly who to frame. Since the setups haven’t been airtight, it doesn’t even seem like Ryan’s all that concerned about putting them away. It’s probably more about creating confusion and making people suffer.

General Hospital spoilers say Lulu will keep searching for answers and that can only lead to trouble. Will she dig too deep and learn the shocking truth? Even if she just gets close, Ryan may feel like she could blow this for him. Lulu could become his next target if she’s not careful! She probably won’t be killed off, but that doesn’t mean there won’t be real peril.

It sounds like this storyline will bring more shockers. We’ll give you updates as other General Hospital news comes in. Stay tuned ABC’s GH and don’t forget to check CDL often for the latest General Hospital spoilers, updates and news.