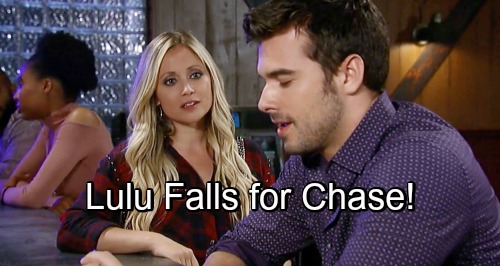 General Hospital (GH) spoilers tease that Lulu (Emme Rylan) will continue to play Cupid. When she found Chase (Josh Swickard) talking to Willow (Katelyn MacMullen), the wheels immediately started turning. Lulu encouraged Chase to make his move while he had the chance. She even fixed Willow’s car so he could take credit and impress her.

Lulu gave Chase another nudge later and it paid off. He’s been awkwardly (and adorably) flirting, which scored him Willow’s phone number. Chase will undoubtedly put it to good use soon enough. He’s clearly smitten already, so he’ll hope they can go on a date and capitalize on this spark.

Willow enjoys the attention, but it’s clear that she’s got some baggage. That’s probably why she appears more drawn to Michael (Chad Duell) right now. They’ve both been attending GH’s bereavement group meetings. It’s tough for them to talk about their losses, but just being around other mourning individuals helps.

A love triangle isn’t exactly a competition, but it’s pretty darn close. Michael’s seems to be in the lead here, so where does that leave Chase? He’s sure to be bummed if Willow ultimately chooses Michael. Since there’s a good chance Willow is Wiley’s anonymous birth mom, she’ll probably become Michael’s girlfriend. With all the baby swap secrets, that the most sense for drama’s sake.

General Hospital spoilers say Lulu will bump into Willow on December 5. They might chat about Charlotte (Scarlett Fernandez) and the bullying issue, but Chase’s name may come up, too. Lulu may hope Chase and Willow are hitting it off. Perhaps Willow will admit there’s someone else she’s interested in. Since Lulu pushed Chase to woo this girl, she may feel terrible!

GH has given us several scenes of bonding between Chase and Lulu. Now that she’s setting him up on dates and presumably failing, Lulu may be destined to be with Chase herself. Her botched matchmaking could lead to their friendship becoming something more.

Lulu is still married to Dante (Dominic Zamprogna), but that won’t last if he stays gone forever. She could easily cheat or simply divorce Dante and move on. Would you like to see Lulu and Chase a couple? Is General Hospital putting that in motion? We’ll give you updates as other GH news comes in. Stick with ABC soap and don’t forget to check CDL often for the latest General Hospital spoilers, updates and news.