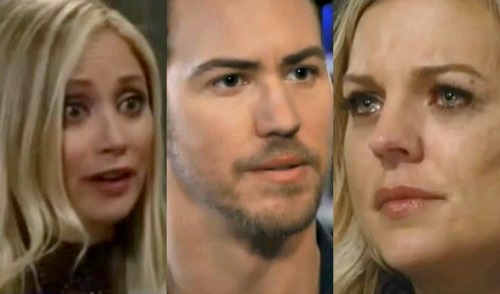 General Hospital (GH) spoilers tease that Maxie (Kristen Storms) will face more confusion. She took a huge step forward during her elevator ordeal with Peter (Wes Ramsey). Maxie thought being trapped together would be a nightmare, but it wasn’t so bad in the end. She helped Peter work through his panic attack, which led to some sweet moments between them.

Peter made one comment that really hit Maxie in the heart. He suggested he didn’t want to forget the past because that’d mean he couldn’t make up for it. Naturally, Maxie will continue to mull over Peter’s remorse. It can’t undo everything he did, but it still means something.

Maxie may make an effort to grow closer to Peter, but there’ll be a problem. Lulu (Emme Rylan) warned Peter to back off and it looks like he just might listen. He already bailed when Maxie attempted to join his chat with Lulu at the Metro Court. That won’t be the last time Peter gives Maxie the brushoff. He’ll trust that Lulu knows what’s best for her good friend, so expect some strange tension.

On September 27, General Hospital spoilers say Peter will seem somewhat aloof. It sounds like Maxie will want to talk, but Peter will give her the cold shoulder. He won’t want to hurt Maxie, but he’ll just feel like this is the ideal way to handle it. Peter will fear that growing closer to Maxie will just bring more drama to her life.

Maxie will undoubtedly want an explanation for Peter’s behavior. She may get snappy and wonder what Peter’s deal is. If anyone’s entitled to brush someone off here, it’s Maxie. She may feel like Peter’s being unfair. That could lead Peter to blurt out something about Lulu’s intervention. He could contend that he’s just taking Lulu’s helpful advice.

Whatever the case, GH spoilers state that Lulu will face backlash. Maxie will track her down that same day and demand some answers. She may be appalled by all Lulu’s meddling. Maxie’s the only one who can decide if she wants Peter’s friendship again. She won’t appreciate Lulu messing things up for her, especially when it’s so clear that she’s craving Peter’s company.

The chase for Peter could actually pull Maxie even closer to him. Will Lulu inadvertently kick off their romance? General Hospital spoilers say it’ll take some time to reach that point, but Peter and Maxie should get there down the road.

GH viewers won’t want to miss the ups and downs of this love story. We’ll give you updates as other news comes in. Stay tuned to the ABC soap and don’t forget to check CDL often for the latest General Hospital spoilers, updates and news.