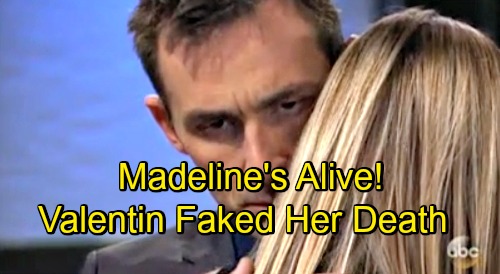 General Hospital (GH) spoilers tease that Valentin (James Patrick Stuart) may have even more secrets. GH fans know already know he’s keeping Nina (Michelle Stafford) in the dark on her daughter. Valentin realizes it would completely break Nina if she got her hopes up and they ultimately came crashing down.

However, Valentin has been meeting with Madeline (Donna Mills) behind Nina’s back as well. He informed Curtis (Donnell Turner) that he returned to see Madeline, who was cooperative after her parole was denied. Valentin was able to secure additional info and a short time later, Madeline turned up dead. Coincidence? We think not!

When Valentin pulled Nina into a hug, he had a strange look on his face. He undoubtedly had a hand in what happened to Madeline. It’s possible that Valentin stirred things up with some baddie who doesn’t want Nina’s kid to be found. Nevertheless, we’re more inclined to believe Valentin was directly involved in this death – or “death” as the case may be.

Valentin might’ve had killed Madeline since she spilled everything she knew. She was useless to him once their business was done. Of course, that move wouldn’t make a ton of sense. Nina was visibly distraught over Madeline’s passing, so she still must care on some level. With so much at stake for Valentin, he probably wouldn’t risk murdering Madeline for revenge.

Instead, there’s a good chance Valentin faked Madeline’s demise and helped her escape. He surely had to promise her something if he wanted that extra info. Madeline gave Valentin the name of the attorney she used for the adoption. Curtis intends to meet with Carter Buckley at his correctional facility, so they’re clearly getting somewhere in this General Hospital storyline.

That was a helpful tidbit for Valentin, so he may have done something in exchange. If Valentin needed another incentive, Madeline could’ve threatened to contact Nina and blab about the daughter search. She had nothing left to lose since her parole hearing didn’t pan out.

Valentin’s determined to keep this hunt under wraps. He may have decided that it’d be better to get Madeline out of the picture. Valentin might’ve planned Madeline’s bogus demise and shipped her off to some island far, far away.

Nina should be furious if she eventually finds out, but all will be forgiven if Valentin tracks down her child. That’s the only thing that matters here. Valentin will take every risk possible if it means reuniting Nina with her long-lost daughter, so stay tuned for more secrets and shockers.