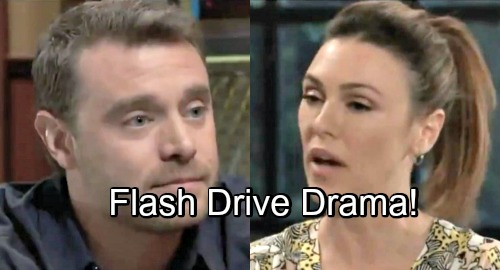 General Hospital spoilers tease that Margaux Dawson (Elizabeth Hendrickson) has some explaining to do! In one of the GH Friday cliffhangers on August 24, she and Drew Cain (Billy Miller) returned to her suite at the Metro Court from having hot wings together at the Floating Rib.

Drew had squirted her with wing sauce, forcing her to return home to change her blouse, after Drew reminded her that Peter August’s (Wes Ramsey) paparazzi squad may be nearby. Drew took advantage of her going into her bedroom to change her top to do a little snooping.

In a pile of folders next to her open laptop, he found the flash drive. She returns with a new blouse, an alarmed look on her face, and the greeting “Don’t touch that.” In the preview for Monday’s new GH episode August 27, we see Margaux promising Drew she will tell him “everything.”

Savvy General Hospital viewers know something’s up with Margaux, and know whatever her explanation is, it won’t be the truth, or least not the whole truth. The computer screen itself was not shown but Drew was far more interested in the piles of files and papers than in the screen, and he didn’t appear to even give it a sideways glance.

General Hospital spoilers say Drew will more than likely guess it’s the drive with his memories on it, and ask her where she found it, why she has it, and why she hasn’t given it to him! Margaux may try to convince him that the drive contains private client files (like he could look at files without putting the drive into the computer to read them).

Somehow she will probably convince Drew to hand it back, even though it’s obvious she’s downloaded it to her computer drive by now. She’s already popped it into her computer and read through it.

Drew may not have all his memories, but he’s no dummy and still has his instincts intact when it comes to suspect behavior. Margaux’s trying to be very discreet (or is that sneaky?) but Drew and a variety of others see right through her. Keep watching GH and checking out General Hospital spoilers to see if Margaux’s met her match when it comes to espionage by dating!