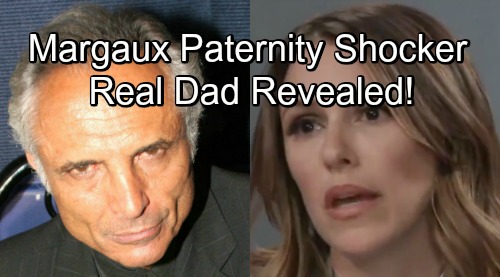 On October 19, Sam McCall (Kelly Monaco) delivered some important info. Damian Spinelli (Bradford Anderson) put Sam on the case in hopes of nudging her toward Jason Morgan (Steve Burton), but she’s already proving quite useful. Sam provided some old newspaper photos of the parties Mr. and Mrs. Marino attended. Baby Margaux even came along to some of them.

Thanks to these pictures, Sonny made a stunning discovery. He realized Mrs. Marino was the mistress of Joe Scully, Sr. Sonny and Jason have been focused on proving Vincent wasn’t a saint, but maybe they should be concentrating on not-so-saintly Mama Marino. That might be where the real dirt comes in.

Mrs. Marino was sleeping with Scully while Vincent was working for him. With that in mind, Margaux’s paternity could be in question. She’s spent her whole life wondering what happened to Vincent, but she may not be his daughter at all. Instead, Scully could be Margaux’s true father. If she gets DNA proof of that, it should really throw her for a loop.

Jason and Sonny should try to get to the bottom of this. Margaux’s DNA may not be difficult to obtain. She lives in Peter August’s (Wes Ramsey) old Metro Court room, so it’d be easy for Carly Corinthos (Laura Wright) to get her hands on a sample. She could have the maid bring her Margaux’s trash or just do some searching herself.

Hair from Margaux’s hairbrush could help with Sonny and Jason’s mission. A used coffee cup or wine glass would also do the trick. Scully’s DNA – or at least DNA from his family members – is most likely available. It could be found in the criminal databases or perhaps in GH’s lab records.

Scully’s grandson, Trey Mitchell, (Erik Valdez) was hospitalized for a brain aneurysm a few years ago. He suffered the aneurysm in a car accident, which ultimately proved fatal. General Hospital may have blood samples stored somewhere. They could yield viable DNA for comparison, so it’d be worth looking into.

GH fans may recall that Trey was briefly married to Kristina Corinthos (Lindsey Morgan then, Lexi Ainsworth now). DNA from his father, Joe Scully Jr. (Richard Steinmetz), may be in criminal databases as well. Sam’s got the skills and determination to dig up any information that could help.

General Hospital spoilers say Margaux may be in for a huge shock. Will the fact that her mom cheated with Scully change the game? Will Margaux find out Scully’s her biological father, not Vincent? We’ll give you updates as other GH details emerge. Stay tuned to the ABC soap and don’t forget to check CDL often for the latest General Hospital spoilers, updates and news.