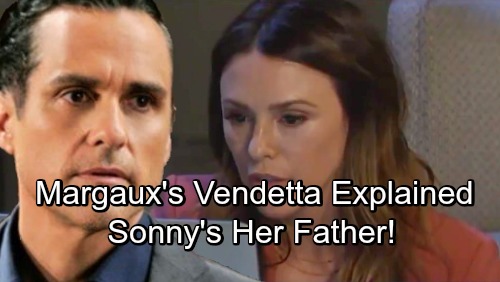 General Hospital spoilers (GH) tease that new DA Margaux Dawson (Elizabeth Hendrickson) has a secret vendetta against Sonny Corinthos (Maurice Benard) tied to a secret past connection. Margaux thinks Sonny ruined her mother’s life, and she wants to put him away so he can’t ruin anyone else’s.

Margaux was given away at birth and knew nothing about her birth parents until she became an adult, and as an attorney, had resources to be able to track them down that went far beyond a normal genealogical search. Long time General Hospital and Port Charles viewers will remember Karen Wexler, (portrayed at different times by Cari Shayne, Jennifer Hammon, and Marie Wilson).

Karen appeared first on General Hospital in 1992-1994, then dropped off the show’s canvas and returned as a character in the General Hospital spin-off Port Charles, from 1997 to 2003. Karen was introduced as the troubled daughter of Scott Baldwin (Kin Shriner) and Rhonda Wexler (Denise Galik-Furey), the product of a teenage fling.

Karen’s mother was alcoholic, and Karen had a rough time of it growing up. She showed promise in high school, where she briefly dated Jason Quartermaine (Steve Burton) and decided to become a doctor, probably because of Jason’s influence. Prior to the wreck caused by his also alcoholic brother AJ (Sean Kanan) Jason Morgan was a promising young future doctor.

After things didn’t work out with Jason, she ultimately wound up involved with Jagger Cates (Antonio Sabato Jr.) although fighting over him with Brenda Barrett (Vanessa Marcil). She eventually won out and ended up with Jagger, but then started having post-traumatic memories surface of molestation by her mother’s boyfriend, Ray Conway (Stephen Burleigh).

She met Stone Cates (Michael Sutton) who introduced her to Sonny Corinthos (Maurice Benard) who at that time was running a strip club, and hired her to strip. This was during a period of time when she was in a summer program for aspiring doctors at GH, likely the same shadow program as still exists there now.

Unfortunately, because of her access to drugs at the hospital, she started popping pills. She also had a brief affair with Sonny during this time. She continued to have problems with drinking and pills because of her memories of molestation the rest of her short life, although she did ultimately become a doctor and was a resident at GH. She was fatally injured, being hit by a car, at only 28.

Fast forward 30-40 something years in soap time and Margaux, who grew up in a group home becomes an attorney, and later a district attorney and wants to find her birth parents. General Hospital buzz suggests that her painstaking research and genealogical DNA test turns up her mother, Karen, who unfortunately is deceased, and leads her to Sonny as her father.

When she finds out her birth father is a mobster, and possibly uncovers and is able to unseal some of her mother’s unsavory history, including the underage stripping in Sonny’s club and the problems with drinking and pills, she probably thinks Sonny is the cause for her mother’s life being ruined, Scotty does.

Margaux probably didn’t bother to research grandparents, or she would have reached out to Scotty by now. Her grandmother Rhonda is also likely alive somewhere, since she left Port Charles. Either Rhonda or Scotty could explain about Ray Conway, who was the real culprit.

But with the information she has, Margaux takes a DA job in Port Charles to carry out her vendetta of taking Sonny down once and for all, blaming him for her mother’s sad and short life! Keep watching GH and checking General Hospital spoilers frequently to see how this story develops!