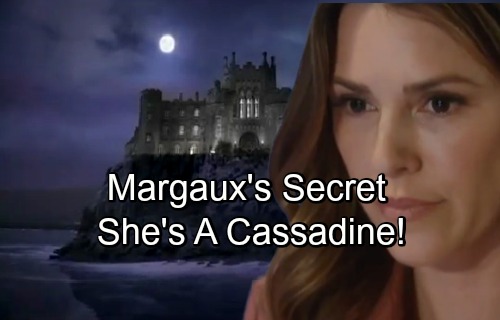 General Hospital (GH) spoilers tease that Margaux Dawson (Elizabeth Hendrickson) may be tied to someone in Port Charles. In an interview with Soaps In Depth, Hendrickson suggested the new DA may “have some connection that has not been revealed yet.” Could that connection involve a major GH family? It’d be a great way for Margaux to plant some solid PC roots.

It’s clear that General Hospital’s pushing Margaux in Drew Cain’s (Billy Miller) direction. Since they’re probably going to be a couple at some point, Margaux can’t be a Quartermaine. It’s also unlikely that she’s a Spencer. Luke Spencer (Anthony Geary) really got around over the years with his various disappearances and turns as “Fluke,” but making Margaux tied to him still seems doubtful.

Sonny Corinthos (Maurice Benard) doesn’t need any more children popping up from his past. Besides, Margaux is likely close to Dante Falconeri’s (Dominic Zamprogna) age. Sonny was involved with Olivia Falconeri Quartermaine (Lisa LoCicero) back then, so maybe we should look elsewhere for Margaux’s PC ties. If this DA found out a mobster was her father, she’d probably never admit it anyway.

That leaves one major family for Margaux to be related to. Could she be a Cassadine? Margaux wouldn’t be the only female lawyer in the fam. Alexis Davis (Nancy Lee Grahn) went into the legal profession and her daughter, Molly Lansing (Haley Pullos), is also studying law. Perhaps it runs in the family!

If Margaux is indeed a Cassadine, which one does she have a direct connection to? Could it be on her mother’s side or her father’s? Perhaps we can rule out the mom angle. The only Cassadine daughters besides Alexis were her late sister, Kristina (Jaime Ray Newman), and Helena Cassadine’s (Constance Towers) daughter, Irina (Alyshia Ochse).

Irina would have been too young, so that leaves Margaux’s birth father. Could Valentin Cassadine (James Patrick Stuart) have a grown daughter he doesn’t know about? That’s an interesting possibility to consider. If GH takes this route, they may reveal that Margaux doesn’t know she’s tied to Valentin either.

General Hospital will want to give Margaux and Drew something to bond over soon. If Margaux’s adopted or lived in a group home like Drew, that might do the trick. Drew doesn’t remember that time in his life yet, but he should eventually. Regardless, Margaux may have picked up the name Dawson from someone other than her biological father.

Valentin may have sown wild oats somewhere between 30 and 40 years ago. That timeline puts him either in WSB spy school or fresh out of it. He was obsessed with Anna Devane (Finola Hughes), but wound up being seduced by her twin, Alex. GH fans will recall that Alex impersonated Anna to steal the Chimera project. Maybe Anna wasn’t the only one to give up a child conceived on a mission!