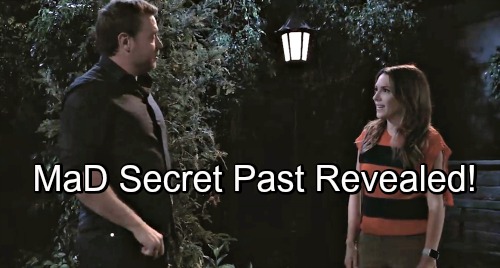 General Hospital (GH) spoilers tease that Margaux Dawson (Elizabeth Hendrickson) and Drew Cain (Billy Miller) have a secret (to Drew, at least) past connection that goes way back, possibly to childhood.

Other General Hospital spoilers tease that Margaux was given away as a child and grew up in an orphanage, and came to Port Charles after looking for her birth parents, one of which was Sonny Corinthos (Maurice Benard), whom she has a vendetta against for ruining her mother’s life.

The implication is that she and Drew were in the orphanage together, and attended the same schools, so they knew each other in the past. Finding Drew was a bonus surprise!

No doubt Margaux became aware of Aurora Media and Drew Cain once she got to Port Charles, although the vendetta against Sonny and his takedown is her main objective. One of the first scenes between Margaux and Drew have them discussing an invite he received to a high school reunion, which would be meaningless to him since he doesn’t remember anything.

He knows he graduated from Sawyer High School in 1993, but is no longer interested in trying to regain his past memories any more, in spite of there being a way to do so, if the flash drive containing his memories and the memory mapping program developed by Dr. Andre Maddox (Anthony Montgomery) could be found and used.

After she found out about this from Drew, and talking to Peter August (Wes Ramsey) about the drive, she was the only one who knew about it who decided to check the Metro Court lost and found, and retrieved the drive.

Why wouldn’t Margaux want to give the drive to Drew, or at least to Dr. Maddox or someone else associated with General Hospital? As DA, she should at least give it to the police for safekeeping if nothing else.

It is implied that not only Drew’s, but Jason Morgan’s memories are on the drive, since Andre’s notes were also visible on it when she put it in her laptop for viewing. She tried to use her knowledge of the drive and its contents to take down Peter August, but Drew intercepted her before she could, saying he didn’t want to press charges.

Jason’s memories would be helpful in taking down Sonny, but then why didn’t she just proceed with that plan instead of asking Drew to help her?

General Hospital buzz says that Margaux doesn’t want Drew to regain his memories, either because of something she wants to hide in her past that he knew about, or maybe something in his past she wants to protect him from.

Just when their paths separated is unclear, although Dr. Kim Nero (Tamara Braun) thought she recognized her, but Margaux denied knowing Kim. Possibly Kim recognized Margaux from a high school yearbook he had showed her before his abduction and subsequent disappearance.

Drew wouldn’t have enough interest to look up his high school yearbook online to find Margaux in it now, although he might in the future; especially if Margaux turns into a full-fledged stalker!

GH spoilers suggest that it seems more likely that what she wants to hide from Drew, is that she was obsessed with him in their past and was stalking him, and with his lack of memories, Margaux sees this new acquaintance with him as a second chance.  Keep watching GH and checking CDL’ s General Hospital spoilers and news to see where this mysterious romance leads!</p