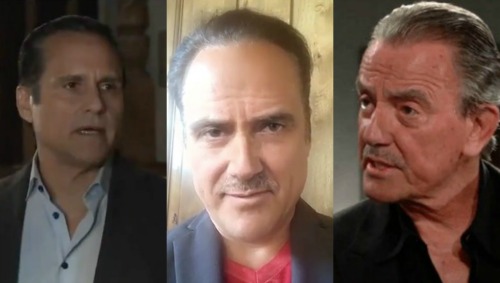 General Hospital (GH) spoilers is pleased to share a hilarious video created by a popular GH star. Maurice Benard, who portrays Sonny Corinthos on the ABC soap, recently shared a video on his Instagram feed that has received a lot of buzz, and for good reason.

The video, which was created by a face mashup app, is a facial merge of Maurice’s face and Eric Braeden’s face creating Sonny Newman. Eric Braeden, who portrays Victor Newman on The Young and the Restless, and Maurice are good friends and the video is a good-natured spoof of what would happen if Sonny Corinthos and Victor Newman were merged.

It really has to be seen to be appreciated, but in the video Maurice – who looks a lot like Eric Braeden thanks to the facial mashup technology – puts on an Eric Braeden persona and says, ”Hi, it’s Eric Benard from The Young and the Hospital. Uh, yes, I think Maurice Benard is an incredible actor…handsome, sexy, the whole thing.”

The video has received tens of thousands of views and has been well-received by Maurice’s followers. Many viewers noted that Maurice did a spot-on impression of Eric Braeden, and most left “LOL” responses and corresponding emojis.

Be sure to watch the video – it’s well worth it. Stay tuned to the ABC soap and don’t forget to check CDL often for the latest General Hospital spoilers, updates, and news.

A little of me a little of my friend Eric Braeden. I hope goes a long way 😎

A little of me a little of my friend Eric Braeden. I hope goes a long way 😎 https://t.co/JRNvkG9sme