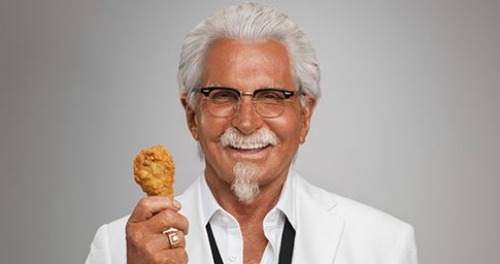 General Hospital (GH) spoilers tease that the ABC soap has secured a major deal and it’s got the soap world buzzing. You’ve might’ve noticed some strange comments from KFC’s Twitter account lately. When they suddenly started live-tweeting the show, fans suspected something might be brewing.

According to Daytime Confidential’s insiders, General Hospital reportedly “brokered a branded content pact between KFC and GH.” Their sources indicate that the tweets will continue, so that should keep viewers laughing along with Colonel Sanders. Speaking of the Colonel, he’ll make an appearance as part of this deal.

KFC tweeted about the upcoming guest spot, which will happen on the perfect occasion. “Colonel Sanders” said, “Hurray for dreaming! This National Fried Chicken Day, I will get to live the dream I’ve always dreamed and appear in the soap opera that captured my heart as a boy, @GeneralHospital. Check it out next Friday at 11am PST. #GH55 #GH #ColonelHospital.”

On July 6, General Hospital spoilers say Maxie (Kirsten Storms) will be blown away by a special visitor. It looks like Lulu (Emme Rylan) will be hanging out at her apartment when this guest arrives. Naturally, we’re talking about Colonel Sanders! George Hamilton will don the classic white suit and show up to promote KFC’s new pickle fried chicken.

It’s not clear why the Colonel would seek out Maxie, but she could use a bucket of chicken-y goodness. Maxie’s bring newborn James home soon, so she doesn’t have a lot of time for cooking. Lulu and Maxie are always great in funny scenes, so it sounds like viewers will definitely be entertained.

Social media users have been poking fun at the product placement, but let’s hope the show laughs all the way to the bank. Soaps could always use extra money, so this is exciting news. Plus, KFC’s Twitter account has over 1.3 million followers. Since they’ve been tweeting about GH, maybe some new viewers will tune in to see what all the fuss is about.

What do you think about General Hospital and KFC’s new connection? Are you looking forward to Lulu and Maxie’s visit with Colonel Sanders? We’ll give you updates as other GH details emerge. Stick with the ABC soap and don’t forget to check CDL often for the latest General Hospital spoilers, updates and news.

Hurray for dreaming! This National Fried Chicken Day, I will get to live the dream I’ve always dreamed and appear in the soap opera that captured my heart as a boy, @GeneralHospital. Check it out next Friday at 11am PST. #GH55 #GH #ColonelHospital